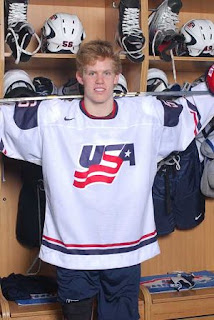 The Oil Kings have circled 2012-13 as the year that they believe they can not only be WHL contenders but seriously challenge for the Memorial Cup. With what the team already has on the active roster, recently drafted or on its protected list, Edmonton is definitely pointed in the right direction. Griffin Reinhart (if he's back in the WHL after being drafted), Curtis Lazar, a 20-year-old Dylan Wruck, 19-year-old versions of Travis Ewanyk, Keegan Lowe, Laurent Brossoit and Michael St. Croix plus possible additions between now and then could make for a very strong team.

However, that plan may take a hit with news that an impact prospect they were crossing their fingers for might not be in the mix for them in 2013 after all.


Henrik Samuelsson is a 6'2, nearly 200 lb forward that spent 2010-11 with the US-NTDP's U17 team in the USHL. He was also called up to play for the U18 roster as it went overseas and captured another gold medal at the World U18 Championship in Germany. 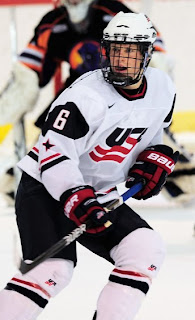 The Oil Kings didn't choose Samuelsson but two years ago they listed him immediately after the 2009 WHL Bantam Draft. They'd already held the rights to his older brother but Phillip played a couple of seasons at Boston College before signing on with Pittsburgh last month. GM Bob Green has always told me that they'll be patient with Henrik and that the Oil Kings didn't expect the Arizona-born forward would leave the US-NTDP before his NHL draft in 2012.

By all accounts he's a potential top-15 prospect for the 2012 NHL Entry Draft and was expected to play for the US-NTDP's U18 team next year. After that, most people I spoke with believed that he'd consult with the team that drafted him and then head to Edmonton for a year in the WHL.

That scenario could still play out but it's looking less likely after the news that Samuelsson is headed to Sweden for the 2011-12 season.

Henrik is the son of former NHLer Ulf Samuelsson who was most recently employed as an assistant coach for the Phoenix Coyotes. That was until he was announced as the new head coach for MODO in the Swedish Elite League a couple of weeks ago.

Dean was the first to speculate that Henrik might follow dad to Sweden. I argued that since he was playing for the US-NTDP in Ann Arbor Michigan and already living away from home, Henrik would stay put and continue on as most assumed to be his plan.

On Saturday we spoke with Chris Peters from The United States of Hockey. Chris, who used to work for USA Hockey, knows the program inside and out so made for the perfect guest to discuss this with. He confirmed the story from his end and we all agreed that it seemed like a decision based more for family reasons that for hockey ones.

Consider that he's not expected to be playing in the SEL but for MODO's U20 team and that the move out of North America will mean less exposure (not that he won't get seen but certainly not as much as with the US-NTDP) and it's hard to argue for the move from a hockey perspective.

We recently posed the question on TPS: Would Gabriel Landeskog (above) be ranked as high as he is if he were playing in Sweden or would he be in the same neighborhood as countryman Mika Zibanejad? Likewise, if Zibanejad were playing in the CHL and getting the exposure over here all season long, might he be sharing the same accolades as Landeskog?

It's an interesting debate but keep in mind that Zibanejad is playing in the SEL (as are Adam Larsson and Jonas Brodin) while Samuelsson appears headed for the U20 league. How will that affect his ranking? Does he fall out of the top-15? Could he slip right out of the 1st round?

And what happens after the 2012 draft? Is it realistic to think that Samuelsson would then report to the Oil Kings for the 2012-13 season? Perhaps if Edmonton looks to be the contenders they think they can be but I'm wondering how many Euros have come over to play in the CHL after they've been drafted? (Serious question... if you know of some examples, please list them in the comments section.) I'm guessing that number is quite small and that the majority stay and play professionally at home or on the rare occasion, (Ladislav Smid, Tomas Tatar), transfer over to the American Hockey League as 18/19-year-olds.

It would be a tough loss for the Oil Kings who could have a very strong line up next year and even more so the following season. With the Memorial Cup returning to a WHL host in 2013, the league will have two representatives. 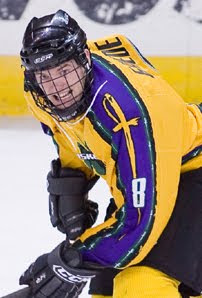 Edmonton still holds the CHL playing rights for college-bound Max Gaede (left) and Troy Hesketh too. Gaede, a 6'2 and 190 lb San Jose Sharks 3rd round pick in 2010, is committed to Minnesota State-Mankato.

Hesketh's NCAA troubles have been well documented. I haven't seen anything about him having latched on to a new NCAA program after being dropped by Wisconsin but Ohio State would be a reasonable bet unless academics are an issue. Both players finished this past year as members of the Sioux City Musketeers in the USHL.

For their part, the Oil Kings are hopeful that in the end, one or more of the above may one day wear an Edmonton uniform but as of now, there's nothing new to report.

I believe Toni Rajala was drafted by the Oilers in 2009 & then came over to play for Brandon for the 09-10 season.

As a fan of US Hockey, I wonder if Henrik goes to Sweden if he could then switch and play for Sweden at international level or his tied to USA Hockey....Anyone have any answers on that......Thanks

Nicholas - I believe the rule is that once a player plays for one country in an IIHF-sanctioned event, he cannot play for another country in future IIHF events. Non-IIHF events (such as Under-17 Challenge, World Cup, etc) don't apply.

Since Henrik Samuelsson played for the USA at this year's IIHF World U-18 championships, I believe he is committed to playing only for the USA in any future IIHF events for the rest of his career.

Henrik was on our show last night and we discussed that. For international hockey he is definitely American now.

He could fly to the 2011 WJC with the Swedish team then cross the hallway to join his American teammates.

Interesting that USA and Sweden played in the U18 gold medal game, he said he was getting chirped by the Swedes.