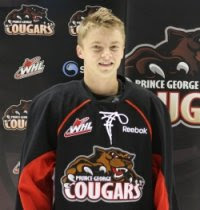 In past years we've heard from Brett Connolly of the Prince George Cougars and in the future Alex Forsberg will be a focal point in PG, but this year the Cougars have Troy Bourke who will hear his named called at the NHL draft. He currently leads Prince George in scoring and put up 21 points in 21 games through Nov/Dec earlier this season.

Earlier this year we have heard from Michael Matheson of the Dubuque fighting Saints in the USHL, Cody Ceci of the Ottawa 67's, Everett Silvertips captain Ryan Murray and Brendan Gaunce of the Belleville Bulls.

In his own words we introduce you to Troy Bourke. 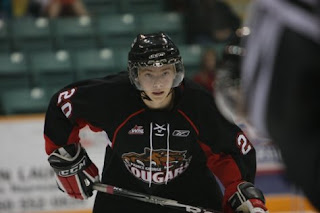 Hi, my name is Troy Bourke, I currently play for the Prince George Cougars of the WHL, and here's a little bit about myself and how my season is going.

I'm from Onoway, Alberta a small town north of Edmonton. Being a small town kid and living on a farm made it easy for me to be around hockey all the time and grow a true passion for the game. I played my minor hockey career in Onoway and had great coaches and mentors like Darryl Veltman and Barry Medori who helped me develop the skills and attitude to become a WHL player.

I played my bantam and midget hockey through Spruce Grove and St Albert and had even more great coaches like Craig Goebel, Dan Hart, Sandro Pisani and Tim Tymchuck who have been so supportive in my hockey journey.

The most influential person in my life and hockey career would be my dad, Kevin Bourke. He's made an outdoor rink on the farm ever since I've been able to skate and I couldn't even imagine the hours he's spent making ice for me and my siblings to skate on. He's coached me for two years in minor hockey and those were some of the fondest memories I have.

My mother, Michelle Bourke, has also dedicated so much time for me and I can't even express in words how thankful I am to have parents who care so much about their family and put our needs in front of theirs. My older brother Brad currently plays for the Augustana Viking(ACAC) in Camrose, AB.

Most of my skills have developed from intense 1-on-1 battles with him on the outdoor rink. My sister Karla is playing her second year for the U of A Pandas hockey team, and my other sister Randi is done her hockey and is becoming a hair dresser. My mom and dad also play at least once a week on their local mens/womens hockey teams. Its pretty clear that hockey has been a huge part in my families life and the journey of the WHL has been life changing.

My season so far has been very disappointing from a personal standpoint. I'm fighting hard to get wins for our club but the luck just hasn't been there. We do have a bunch of good young sixteen year olds that will be good in this league the more they play. This year I've taken on more of a leadership role to help the sixteen year olds out and make them feel a part of the team as guys did for me last year. 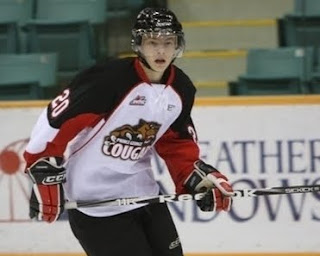 [Head Coach] Dean Clark and [General Manager] Dallas Thompson have given me every opportunity I could ask for and I really appreciate that from them. Our record isn't the greatest right now but it doesn't reflect the team that we could be in the near future. My ultimate goal for the remaining part of the season is trying to help our team clinch a playoff spot because anything can happen in a seven game series especially when we have a goalie like Drew Owsley.

Being around the guys in the room and bus still makes every day fun and exiting, and to play with some of the great players I have the past two years makes it that much more special. We're so privileged to play the game that we love every day and I try to never take things for granted because many kids would die to be playing hockey where I am. I would also like to acknowledge my billet parents Mike and Faye Kelly for being the best billets in the league and helping me through everything along the way

There's a little bit about myself, family, and team. Thanks a lot for reading!