He was the youngest player at Canada's U20 summer camp this past August in Edmonton but Cody Ceci didn't look out of place. The Ottawa native is a 6'3, 210 rearguard who is now entering his third season in the OHL. The late '93 birthdate could work to his advantage on draft day as NHL teams will view him as a prospect slightly closer to the NHL than his counterparts born in 1994 who only have two years in the CHL under their belt.

It was in Edmonton where we first spoke with the potential 1st round pick but today we get the first entry to Ceci's 2012 Guest Draft Blog here with us. It's brief but wets the appetite for us to hear more from the 67's defender as he and his teammates begin their quest for the CHL's top prize.

Here is the first contribution this year from Cody Ceci... 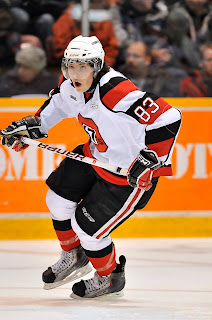 Hey I'm Cody Ceci from the Ottawa 67's. I play defense and wear number 83. I am from Ottawa and therefore play at home.

This summer I was lucky enough to get invited to the World Junior camp in Edmonton. I had a blast at the camp playing with and against all the top draft picks from this year's draft and the previous year. The camp was a great experience and I think it definitely gave me some confidence which I could carry over into the season.

The start of the season has been good so far for the team and myself. We have a great team this year and I think we can really do some damage. Despite having 2 top forwards out right now in [Dalton] Smith (CLB) and [Shane] Prince (OTT) and most likely losing ]Ryan] Martindale (EDM) to the AHL, we've been playing some good games to start the season off.

I think this year we can definitely be considered as a Memorial Cup contender.

Cody Ceci is listed at 6'3 and 210 lbs. The defenceman has already collected 2 goals and 8 points through the first five contest in the 2011-12 season. He's ranked in the top 30 on every scouting agency ranking that we have seen including #28 by ISS. Cody was the 67’s first round pick in 2009. This Ottawa native from Orleans had 12 points in his rookie season in 2009-10 and more than doubled his point total last year putting up 9 goals and 25 assists for 34 points from the 67’s blue line.