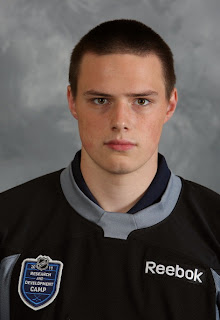 He is the current OHL Player of the Week after scoring 5 goals and 6 points in 3 games, further cementing his status as a must-see player eligible for the 2012 NHL Entry Draft. Now today, Brendan Gaunce of the Bellville Bulls joins an already illustrious group of TPS Guest Player Bloggers this year with his first entry of the season.

Earlier this year we have heard from Michael Matheson of the Dubuque fighting Saints in the USHL, Cody Ceci of the Ottawa 67's and Everett Silvertips captain Ryan Murray. Now, in his own words, we're pleased to introduce you to the leading scorer of the Bellville Bulls and top prospect for 2012. 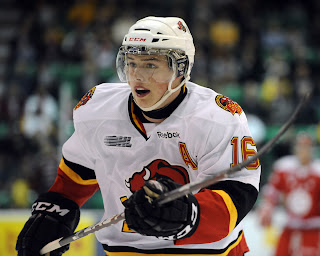 Hi everyone, my name is Brendan Gaunce and I play for the Belleville Bulls of the Ontario Hockey League. This is my first blog so I will begin with some general information about myself and my family.

I was born in Sudbury, Ontario along with my brother Cameron, who plays for the Lake Erie Monsters in the AHL. My family is originally from New Brunswick, with both my parents Stephen and Julie as well as my sister, Allyson, being born there. Most opinions or all will vary from mine, but these two cities could be the nicest in Canada.

When I was about five months old we moved to Markham, Ontario and have lived there ever since. Growing up, I was always fortunate to be around the rink. My sister, Allyson, played for the Stouffville Clippers until she was 16. On the other hand, my brother always played for the Markham Waxers, which is where I also played my minor hockey. I cannot say enough about the tremendous support the Waxers organization provided for both my brother and I. Most importantly are my parents, without their ongoing support for all three of us, we couldn’t have played as much hockey as we did growing up and I owe everything to them. 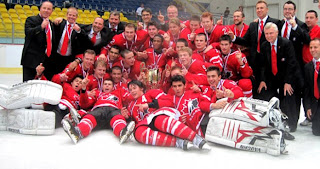 As for my recent hockey endeavours, I will start with this summer and the opportunity I was given to represent my country. This summer may have been the most hectic summer I have ever had. At the end of July, I was lucky enough to be invited to the selection camp for the U-18 Ivan Hlinka tournament. This camp lasted four days and from there the team would be flying to Czech Republic. I was chosen to represent Canada at this tournament, which has been the biggest accomplishment of my young hockey career. When something like this happens, you always hear players saying “There are no words to describe this feeling”. Well they’re right. Something like this is so humbling, and the shock doesn’t wear off until you are wearing a Team Canada jersey for the first time. Unfortunately, the “awe state” we were all in didn’t wear off quite in time. We ended up losing our first game to Sweden, but eventually came together and won the Gold medal. As the tournament came to a close and the guys were saying goodbyes, another hockey event was planned. Luckily for me, it was based in Toronto, so no more travel. 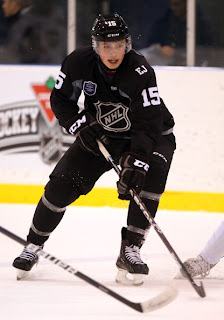 This event was the Research and Development Camp, hosted by the NHL. It brought together 40 draft eligible players to test out some of the new rules which could be implemented into the NHL in the near future. This experience was another that I will never forget. If I had to sum everything up, this summer may be the most influential and exciting times of my life, so far that is.

Currently I am in my second year with the Belleville Bulls. My rookie season was definitely an emotional rollercoaster ride. From leaving home for the first time, to achieving a goal I set for myself at a young age (playing in the OHL) and add in play on a rebuilding team, things were overwhelming. In the end, I gained a lot of experience and skills that will help me later in life, within hockey and in the outside World. 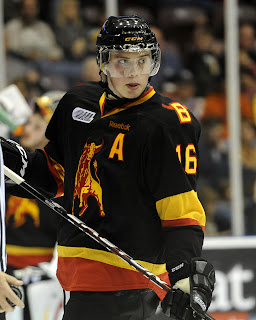 Coming into my second year, there were a lot of newfound expectations for both myself and the team. We had had enough of the rebuilding phase, and wanted to make a statement early. So far, our team is 16-9-0 and currently sit second in our division behind Ottawa. In our last 11 games, we have a record of 9 and 2, mainly based on our outstanding goaltending tandem. At the beginning of the year, our team was hit with the injury bug and was forced to rely on a small lineup each game. As we began to replenish, the chemistry and success followed. We are looking to keep this success throughout the season and make it deep into the playoffs.

Well that’s enough for now; make sure to check back in about six weeks as I will be writing my second blog, thanks for reading!

Brendan Gaunce is a center listed at 6'2 and 212 lbs. He represented Canada at the 2011 Ivan Hlinka tournament, and finished with 4 points in 5 games and a gold medal around his neck. Thus far in 2011-12 he has recorded 15 goals and 27 points in 25 games. He's currently ranked 9th overall by ISS and 7th in the OHL by NHL Central Scouting for the 2012 NHL Entry Draft.

Without a doubt, one of the best and most well written blog entries you guys have had by a player.

Great job to you guys as well and great job by Brendan. Look forward to reading the next one.

agree completely Brock... and I hardly had to edit a single thing. One "they're" to "their" (or other way around) and that was about it.

Solid guy when he was on our show too. Rare to have a player his age so well spoken.