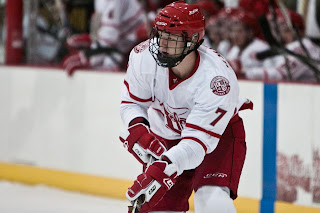 Michael Matheson is a native of Quebec playing his junior hockey in the USHL for the defending champion Dubuque Fighting Saints. His first blog entry here with us was made public back on October 3rd and gave readers a sense of where he's come from and what has led to the position he is in today. He continued his 2011-12 story with chapter 2 at the end of November.

Here now is the third chapter in the 2012 Guest Player Blog written by defenceman Mike Matheson. 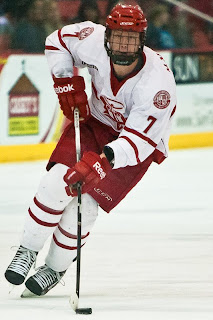 Hi there. I hope everyone had a good holiday and a nice start to the New Year! It was nice to be home for a week around Christmas to see my family and friends in Montreal. I also had an opportunity to visit my old high school from last year, named John Rennie High School in Pointe-Claire, QC.

Our team has continued to get better and better, while battling our way through the season. We are currently two points out of second place. In our last 25 games, we have a record of 14-10-1. We have been playing a little inconsistently lately but are starting to get back to playing Fighting Saint Hockey with 5 wins in our last 7 games. Our next test is at home against Muskegon, this Friday.

I am not one to find excuses for anything, but we have been struggling lately with lots of injuries. We have not had a full roster since October 22nd. Two of our team’s strengths are size and speed. We have been working hard all season to be in the best physical condition possible. I think it will help us continue to do well through playoffs, even though we have had such a short bench throughout most of the season. 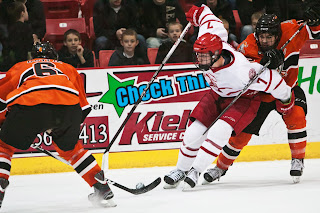 The USHL is one of the toughest Junior Hockey Leagues around. There aren’t quite as many games as the CHL for example, which means that every game means that much more. Any team can be beat on any given night, and every game is played with that in mind. I wasn’t very happy with my game through the first half of the season but my coaches have continued to help me get better. Since the Christmas break, I have been much more affective for the team.

Some people have asked me if it is hard to not get distracted by all the different rankings that have been coming out. I know the worst thing I can do is pay attention to them because no matter what, it won’t help me. I have concentrated solely on playing for the Saints and trying to accomplish exactly what our team has set out to do: win the Clark Cup. I have a lot of confidence in our team. We have a coaching staff that knows what it takes and demands it from us every day, we have a set of leaders who have done a great job in bringing us closer together and making us a true Team, and have the dedication that it takes to go far in the playoffs.

With our great fans behind us, we will continue to fight for every inch is this league and prepare ourselves for the post-season. 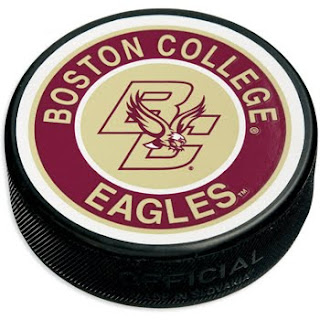 There have been a lot of rumors swirling about the possibility of me playing in the Quebec Major Junior League next year. In an effort to build their team for their Memorial Cup run, the Shawinigan Cataractes traded my rights to the Moncton Wildcats. I just wanted to express the fact that I am concentrated on finishing this year with the Dubuque Fighting Saints and am excited, and ready to begin playing next year for the Boston College Eagles.

Michael Matheson is a defenceman listed at 6' and 170 lbs. He's described as a solid skater with strong passing skills and a calm, mature demeanor on the ice. He represented Canada at the 2011 Ivan Hlinka tournament and thus far in 2011-12 he has recorded 4 goals and 14 points in 34 games. He's currently ranked 26th overall by ISS and 29th in North America by NHL Central Scouting for the 2012 NHL Entry Draft.