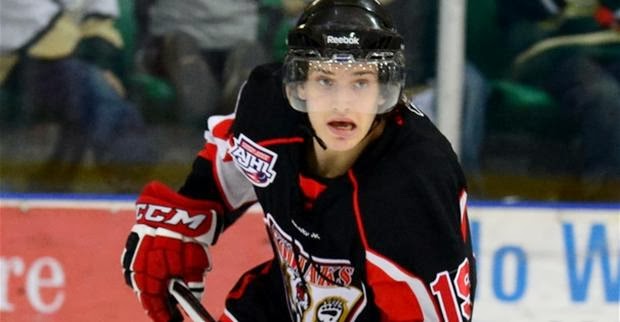 We first heard from Camrose Kodiaks forward Tanner MacMaster back in September during the 2013 AJHL Showcase. The talented forward appeared on The Pipeline Show that weekend (Listen Here) and then accepted and offer to blog with us this season. You can read Tanner's first entry to the blog HERE.

Three months have passed and Tanner has put a few more thoughts down for fans to read. The Boston College recruit continues to lead the Kodiaks in scoring having scored 11 goals and 29 assists for 40 points through 46 AJHL games this year.

The second entry to the blog courtesy Tanner MacMaster comes after the jump.


Hello Everyone,
My second season with the Camrose Kodiaks didn't start quite how we wanted it to. Our team got off to a slow start and for a month-long stretch we had lost 9 in a row. When something like that happens the team is down and going to the rink just isn't as fun as if you were winning.

We knew that we had to change something to turn the season around. We had made a trade that brought 3 solid players from Okotoks to Camrose and I think that has benefited our team in a positive way; Since November 1st our team has gone 17-4-5. Finally it felt that things were going our way.

Not only was the team struggling at the beginning of the year, but many of the players were as well, including myself. Sometimes it feels like no matter how hard you try the bounces just aren't going your way. But I knew if I just kept things simple and played my game that things would start turning around, and they have.

This season has flown by and is already in the final stretch towards the playoffs. I believe that we have a solid team this year and I am looking forward to what we can do this year in the playoffs.
Tanner
Tanner MacMaster is a top ranked player from the AJHL this year having been given a 'B' rating by NHL Central Scouting at the start of the season. Central Scouting slotted MacMaster 94th in North America in their January Mid-Term rankings. The Calgary product is listed at 5'9.25 and 156 lbs and currently leads the Camrose Kodiaks in scoring with 40 points through 46 games. He has committed to join the Boston College Eagles next year.