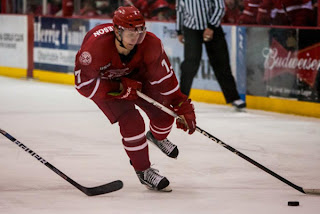 Here now is the final entry to the season-long blog series of Dubuque defenceman Michael Matheson...

For the younger readers, I hope you are out of school by now and enjoying your summer. If not, it shouldn’t be too much longer. We should have a pretty nice summer in Montreal so I’m looking forward to that but lately it seems I have been everywhere except home!

I had the opportunity to attend the NHL Combine in Toronto and then have been invited to a few teams’ individual combines.

The NHL Combine went from Monday May 28th until Friday June 1st. I was lucky enough to be rooming with my teammate Zemgus Girgensons who will be a very high pick in this year’s draft. It made it much easier for both of us, not having to worry about being with a total stranger during our time in Toronto. We met with different teams from Tuesday to Thursday and then did the physical testing on Friday.

I met with 25 teams over the three days, which seems to be a lot to do but it was very easy to get up in the morning knowing the environment I was in and the opportunity I was being given. Each team had a designated room in the hotel where we would meet. Most teams had anywhere from 5 to 15 people in their room for the interview process. The meetings were never longer than 20 minutes. Most of the questions asked were for me to talk about my family, my game, where I need to improve and how I will go about making those improvements. 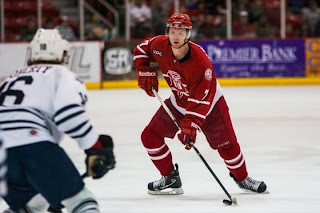 On Friday, I was testing at 3:00. I woke up in the morning to have breakfast and then went for a walk outside to get some fresh air. Later on I tried to take a nap but was only able to fall asleep for a little because of my nerves. It is definitely an intimidating process, but I knew I was ready which gave me confidence going in to it.

When we arrived at the testing facility, we met with several doctors to go over our medical background and then were put through many tests to make sure that everyone was healthy enough to perform the other tests. We then moved passed the curtains and in to the testing area.

We started with our height, weight, vertical reach and wingspan. We then moved on to the grip strength test, followed by the push up test as well as the push and pull test. Next were the bench press and then the vertical jump. We then did the sitting med ball throw, the long jump, the agility test, and the balance test.

It was then time for the Wingate and VO2 max tests. We performed the Wingate first and then had a half an hour to recover. After practicing it many times and puking a few times during training, I was able to keep it down for the Combine. After our break, we came back out for the VO2 max. I would have to say that the two bike rides were the hardest tests because they truly push your whole body until it gives out. It is very tough physically and even more difficult mentally. 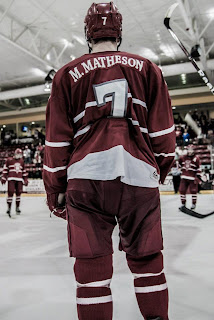 My best tests were the long jump and the agility tests.

Several teams throughout the league hold individual Combines as well, where they bring in different players to test them on some of the things the NHL Combine didn’t cover, while also getting the opportunity to get to know the prospects a little better.

I went straight from Toronto to Buffalo on Saturday after the Combine to meet with their organization. My next trip was the following weekend when I went down to Boston to meet with the Bruins organization. I performed their testing on the Saturday and then had my freshman orientation at Boston College from Sunday to Tuesday. My parents and I drove home Tuesday night.

I then met with the Montreal Canadiens organization on Wednesday for their testing. It was incredible to see the environment in which NHL players live. It truly is the greatest “job” in the world, especially since most hockey players would never even consider it to be that.

These past few weeks have been very busy but it’s for the best reasons possible. I am really excited for the draft. It will be a weekend that I will never forget for the rest of my life and will enjoy every moment of it with my family and friends who will be able to make the trip to Pittsburgh.

You can follow me on Twitter @MMatheson7. I will try to give you an inside look at some areas of the Draft!


Michael Matheson is a defenceman listed at 6'1 and 178 lbs. He's described as a solid skater with strong passing skills and a calm, mature demeanor on the ice. He represented Canada at the 2011 Ivan Hlinka tournament and he ended the 2011-12 campaign with 11 goals and 27 points in 53 regular season games plus 4 goals and 5 points in 5 playoff appearances. He's currently ranked 34th overall by ISS and 30th in North America by NHL Central Scouting for the 2012 NHL Entry Draft.