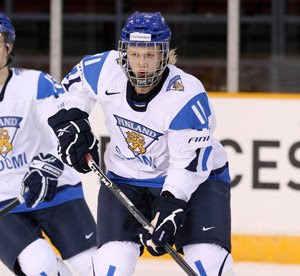 The recent news that Oiler prospect Toni Rajala was injured at a U20 event came as a blow to fans of not just the NHL club but of Finland and the Brandon Wheat Kings.

Details on the incident are sketchy at best but I spoke with the Oilers recently and was told that it's a very serious knee injury. How serious won't be known likely until Monday when the player's agent gets the results of the MRI that has been done.

The report from Iltalehti.fi out of Finland was that Rajala was hurt during a game against Switzerland. That is contradicted by what I was told today by the Oilers.

"We're still waiting to hear [details] but I guess he got tackled in practice and hurt his knee. He got a MRI done [Friday] and we haven't been told how bad it is but it didn't sound very good," said the team source.

Perhaps he was hurt in practice, gave it a go in the game and simply couldn't perform? Whatever the case, it's obviously not good news for the young man who was looking forward to beginning his WHL career in a few weeks with Brandon. Not only will this setback affect the start of his season but potentially much longer.

"This might [screw] him up for the whole year, it sure didn't sound good the way they were describing it to us."

That said, it's important to keep in mind that early impressions aren't always accurate. Last year Zack Stortini proved that fact after landing awkwardly on his ankle and simply missed a few games when most thought after the incident that he'd be out long term.

Once the MRI information is released then the Oilers and Wheat Kings will have a much clearer indication of where things sit in regards to Rajala's injury and expected rehabilitation time.

According to NHL.com, the Oilers have five RFAs left to get under contract. However, one of the five players listed there is Colin McDonald who was signed by the club more than two weeks ago.

I'm told that deals for Gilbert Brule, Ladislav Smid, Rob Schremp and Ryan Stone are progressing nicely and that none of the negotiations are expected to drag on much longer. All players should be at camp.

Last year's 3-team rookie tournament held in Camrose involving Edmonton, Calgary and Vancouver has not completely been scrapped this year as originally reported. It will however been altered as the Flames have dropped out and have been replaced by the UofA Golden Bears.

I'm told that the UofA will host the Canucks on Wednesday September 9th at Clare Drake Arena. Edmonton will then square off with Vancouver in Leduc on the 10th followed by the annual Golden Bears vs Oilers rookies game at Clare Drake on Friday the 11th. The UofA website corroborates this information.

This is good news for those who enjoyed the Camrose sessions last year and for guys like Dean and I who are going to be all over it for TPS (and I guess Global Sports too).

Another Springfield Signing and Camp Invites 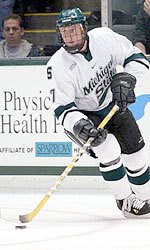 Last week the Falcons announced the signing of AHL scorer Colton Fretter, a 24-goal man last season with the Portland Pirates (BUF). Fretter is a former Michigan State teammate of Bryan Lerg and was a 8th round draft pick of the Atlanta Thrashers back in 2002. In his first pro season he scored 36 goals in 51 ECHL games with Gwinnett.

"We were looking for another top 6 forward because we probably would like to have eight of them to stay away from the injury bug," Kevin Prendergast told me recently. "He's not flashy or anything but he knows how to score."

And with that signing you can expect that the Falcons are basically done with their off season talent hunt. Alex Giroux resigned with Washington/Hershey so he is off the table.

"We're done. The one thing we are missing is a tough guy [up front] but we're going to have two or threes guys come to [Springfield's] camp on tryouts and see if we can get one out of that," said Prendergast.

Matt Nickerson was signed earlier this summer but he's penciled in for a blueline position 9if he even makes the AHL team) so Prendergast would like bolster the beef quotient up front. One of the confirmed invitees to Springfield is Ryan Hand, a 6'1 180 lb knuckle-chucker out of the LNAH. Hand had 252 PIM in 2007-08 with St. Hyacinthe.

Mike Sgroi is also expected at Falcons camp. Sgroi is a 6'5 230 behemoth that dressed for 6 different pro teams in 2008-09. The 31-year-old originally hails from Toronto but has been living out of a suitcase playing for 20 different teams in the last 10 years.
Posted by Guy Flaming @ 1:59 PM

f Rajala's injury is of the 3-4 month variety will he even play for Brandon this year?

Do you have any idea why Calgary pulled out? How disappointing.

I doubt the Flames were terribly impressed with the injuries suffered to a few players last year, especially the cheap shot Greentree took.

Ryan Hand was also one of the players featured on the documentary "Junior".

I had the pleasure of watching Mr. Hand with Rapid City in the CHL last year. He loses quite a few more fights than he wins, but he's at the very least entertaining. No one got the crowd as worked up as much as he did.