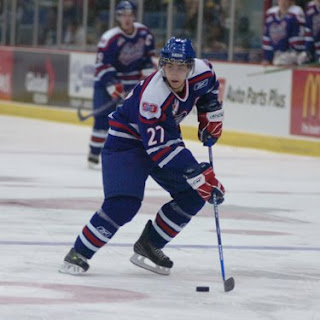 Team Canada hero and Oilers first rounder from last June met with the Edmonton media this morning, as his Pats are in town to face the Oil Kings Saturday night.

Eberle has been great since returning from Team Canada, with 11 points in 9 games, and seems to be one of the few Pats doing anything, as the team has dropped 8 of their last 12 games. The 22nd overall pick from last June is on the opposite track as fellow first rounder and Regina Teammate Colton Teubert.(pictured below) 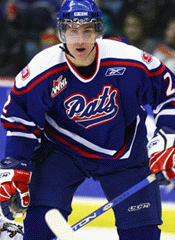 The Kings prospect was a healthy scratch recently and Los Angeles G.M. Dean Lombardi has spoken to the D-man about his play and behaviour off the ice recently. Teubert can be a great player if he doesn't let his reputation (and what some are telling him) trick him into thinking he's earned a spot with LA for next year.

As for Eberle, should Regina miss the playoffs (they're battling for 8th right now) or bow out early, the Oilers will ask him to finish the season with Springfield of the AHL. Colton Gillies did the same thing after Saskatoon's season last year when he reported to Houston and it should be a good indication of whether or not he might be ready to turn pro next year. Shameless plug time, I'll have a story on Eberle tonight (Friday) at 6 and 11 on Global.

I spotted J.F. Jacques skating out with Steve Serdachny this morning before the Oilers morning skate, and had a chance to chat with him afterwards. He's been skating for about 3 weeks now and says while his back is a little sore and will be for likely the next year, it's night and day compared to pre surgery. JFJ told me he expects to be in AHL game action by next Friday with Springfield.
Posted by Dean Millard @ 3:42 PM