Just becoming official... The Edmonton Oil Kings have acquired banished Everett Silvertips scorer Tyler Maxwell. The 'Tips receive a 3rd round pick in 2012 and prospect Griffen Foulk who was a 8th round pick in 2010. 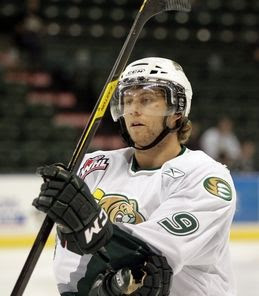 This is a huge move for the Oil Kings as they look to inject more offensive punch to their top 6. Maxwell lead Everett in scoring last year with 66 points in 68 games including 41 goals. The California native is an undrafted 5'9, 180 lb forward, listed by Everett as a left winger.

More interestingly, he's a 20-year-old which means another decision will be coming down the pipe for GM Bob Green. The Oil Kings already have 3 in their line up: Rhett Rachinski, Josh Lazowski and Jordan Peddle. I'll be interested to see what happens here because you have one guy who has been with the team since the expansion season (Rachinski), one who followed assistant coach Steve Hamilton from the AJHL to the Oil Kings (Lazowski) and one who was acquired via trade earlier this season (Peddle). I'm guessing Lazowski is the odd man out... but that won't be an easy decision for some in the organization if that's the case.

UPDATE: I have confirmation now that Josh Lazowski has been placed on waivers by the Oil Kings. I would assume that should he not get claimed that he'll return to the AJHL. He last played in the league for the Spruce Grove Saints.

Maxwell has been at home awaiting a trade after being sent packing by GM Doug Soetart after the scorer asked to be moved. In 19 games this season he has scored 11 goals. Although another undersized forward for Edmonton, no question Maxwell has what it takes to potentially lead this club in scoring.

A big move by the Oil Kings who look to climb the standings in a very tight Eastern Conference. And great timing too with the Medicine Hat Tigers coming to town for a Friday night game that will be broadcast across the country on Sportsnet. The Tigers have been a major hurdle for the Oil Kings so adding an offensive weapon like Maxwell right now is excellent strategic timing by Green.
Posted by Guy Flaming @ 10:54 AM