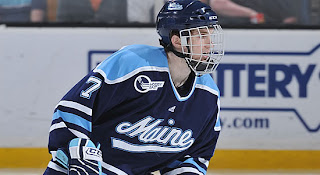 It's August 15th and barring some unreported last minute signing miracle, Robby Dee is no longer property of the Edmonton Oilers. TPS contacted the Plymouth Minnesota native yesterday and confirmed that nothing, as of 8PM Eastern, had been received from Edmonton. Dee declined to offer further comment other than to say that, at that time, he was "still Oilers property".

Dee played out his college eligibility at the University of Maine and ended his NCAA career in fine form scoring 35 points in 36 games for the Black Bears. It was the second consecutive season that he registered 13 goals as well. 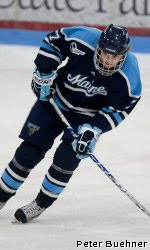 The news that Edmonton chose not to sign Dee is not stunning. We've been telling readers that have stopped by here over the last few years that Dee has been so far off the radar of the Oilers that they'd even stopped inviting him to their summer prospect camp. During this past edition of that camp in early July, we discovered from Mike Sillinger that Dee wasn't a player he was following up on despite obviously watching the Black Bears enough that the team signed Tanner House.

Dee was a 3rd round pick by the Oilers back in 2005 after a strong high school season that saw him in the running for the Mr. Hockey Award recognizing the most outstanding senior high school hockey player in the state of Minnesota. That year he'd scored 49 goals, the most in the state. 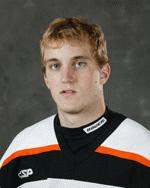 The following year he joined the Omaha Lancers of the USHL to get prepared for his transition to the NCAA level. Unfortunately a serious shoulder injury shorted his season and he lost a lot of development time.

What made matters worse is that head coach Tim Whitehead and the Black Bears then delayed his transfer for another season hoping another year in Omaha would get him back to where he would have been if not for the injury. As fate would have it, Dee would suffer a second shoulder injury and it was basically another year season.

Finally in 2007-08, two years after being drafted, he made his way to Maine but after a pair of shortened seasons in Omaha, it's fair to suggest that his skills and timing were off. His freshman year ended with just 3 points in 24 games, his second season at Maine only marginally better with 11 points. 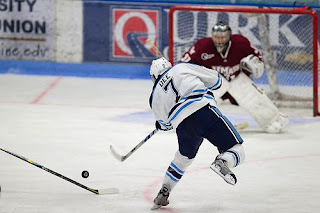 It wasn't until 2009-10 that Dee's game came around. Obviously being a junior would provide him more playing time and better game situations too but jumping up to 25 points was inspiring for him - proof that his scoring touch wasn't completely lost, just in need of rediscovery.

Then the point-per-game campaign that was his senior year. The 6'1, 185 lb forward may never play a shift in the NHL but I'm still really surprised how the Oilers completely ignored him over the last 3 years. We're talking about a 3rd round pick, not a 6th or 7th round gamble but a player that was quite worthy of a being taken 86th overall in 2005. It seems like questionable asset management to me. 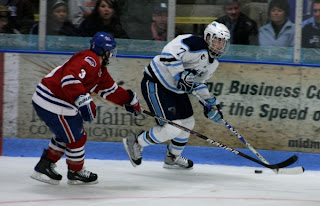 I hope a team gives him a look at their camp next month and that he earns himself a pro contract. It's a shame how injuries can impact a promising career but Dee has shown glimmers of being able to put himself back on track. I hope he gets the opportunity at the next level because I'm curious to see if he can make it.

Some other NCAA seniors who might become UFAs today include: Miami RedHawks forward Justin Vaive (ANH, 4th in 2007), Blake Kessel (NYI, 6th in 2007) and Phil DeSimone (WSH, 3rd in 2007) both from the University of New Hampshire. There are most certainly others but I haven't been able to track down a complete listing and owe TPS regular Julie Robenhymer my thanks for giving me those three names from off the top of her head.

Billy Sweatt (VAN) is just one example of a player who spent 4 seasons in college, was not signed by the team that drafted him (Chicago), and was a sought after commodity once August 15th rolled around. I'm sure we'll hear of some signings over the next few days of players in the same situation.