Up to this point the term 'Hands of Stone' has always been used in a negative way to describe a player who just can't produce offensively even when goals are gift wrapped for him. That saying might be due for an update because after notching 8-points in Canada's two Red/White games, Brandon's Mark Stone (OTT) is proving that there's absolutely nothing wrong with his hands.


Stone wasn't one of the players coming in that most fans were going to be flocking to see. He was a 6th round pick of the Ottawa Senators back in 2010 after a campaign where he was limited to 39 regular season games. The Senators obviously liked what they saw from the Winnipeg native during the Memorial Cup which the Wheat Kings hosted. 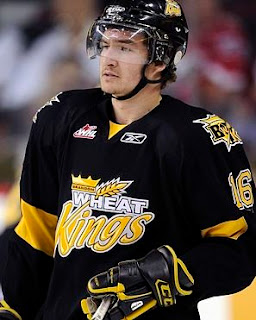 During that tournament Stone was sliding onto the top line with Matt Calvert (CLB) and Brayden Schenn (PHI) because of the injuries and struggles to Scott Glennie (DAL). Stone didn't look a bit out of place with the big guns and our listeners heard Dean Millard raving about his play while in Brandon taking in the tournament.

This past weekend we had Brandon GM Kelly McCrimmon on our show and he too reflected on what Stone meant to the team then and moving forward.

"Mark's a really smart player. Any time one of the guys on our top line was missing, we'd put Mark in because he understands the game so well and can see the game the way those top players do. His skating has really improved and I think that was the biggest area of his game that needed to get better."

He scored 17 goals as a rookie back in 2008-09 then 11 in the injury shortened season. Last year Stone broke out for a massive 106-point campaign which included 37 lamp-lighters. 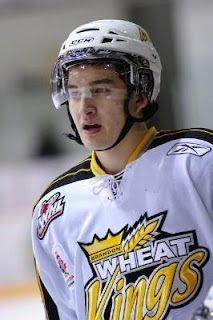 "Those two guys are great players, top-five picks in the National Hockey League," Stone told media in Fort McMurray on Sunday. "I just had to come in here, not change anything from what I did this season. Being paired with those two, it was great chemistry."

I don't know about you but I immediately go back to the 2010 Memorial Cup and see the exact same correlation; Stone fitting in and complimenting two bigger name players who are also generally considered to be bigger offensive talents.

At this point, considering how successfully he was during the summer sessions, not only should Stone be considered a lock for an invite back to the December camp but he should be thought of as a favorite to nail down a key forward spot too.
Posted by Guy Flaming @ 10:12 PM