Interleague Play in the CHL 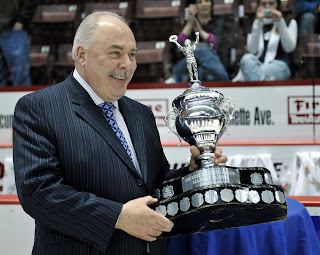 Training camps are well underway in the CHL, the Q has even played exhibition games already. Now wouldn't it be nice if you lived in Regina and were able to watch Gatineau take on the Pats or Sarnia face off with Medicine Hat? How about living in Quebec and having the opportunity to see Kelowna skate against Belleville in the pre-season?

If the CHL held interleague play during the pre-season you would get to see that.


We think it would be a fantastic idea if teams from each league traveled for a pre-season tournament to the 2 other leagues. Last year the Soo Greyhounds went west to Everett Washington for the 'Tips pre-season tourney and played three WHL clubs.

Here is an example of what we'd like to see:

Regina and Calgary head to the OHL, while Vancouver and Kelowna travel to the QMJHL. At the same time, 4 OHL and 4 QMJHL teams would also be split up in tournaments as well.

That way fans in all 3 leagues would get a chance to watch teams and match ups they might only see at the Memorial Cup. Of course cost might be an issue, but a big fat title sponsor...like an airline..might help offset the money issue.

I would love to head to the Oil Kings pre-season tournament and get to watch not only teams from the dub, but one from the OHL and QMJHL also. I think fans in all 3 leagues would welcome this. Do you?

We'll ask CHL/OHL commish David Branch about this tonight when he joins us for two segments starting at 7 pm mst/9 pm est on the TEAM 1260, or online here.