Deadline Dmen in the WHL

The WHL trade deadline is January 10th, just 5 days after the World Junior Championship. A player isn't supposed to be traded during the tournament, but it does happen, it's just not officially announced until after the event. Here are a few blueliners who will be available leading up to the deadline. Some of these players may have already been dealt, but as mentioned it can't be announced until they return to their WHL teams.

Luca Sbisa of the Lethbridge Hurricanes is the biggest name among the teams that are out of or falling out of the playoff picture, and he'll add plenty of experience to any team with 47 NHL games already under his belt. But Sbisa does come with a buyer beware label. The Swiss product was recently hurt at the World Junior Championship. TSN's Bob Mckenzie is reporting that it's an ab/oblique tear and that he'll be out for atleast 4 weeks. But that's not the only reason teams might stay away from Sbisa. He's suiting up for his country at the Vancouver Olympics. That means whatever team trades for him, likely won't have him in the line up until March, meaning Sbisa will have less than 2 weeks to gel with his new teammates. Sbisa is 19 years old, but won't be back in the WHL next season.

Sbisa's injury/Olympic situation might make Dallas Jackson of Prince George more valuable at the 10th of January looms closer. The scouting report I received from a western conference management source is this:

"Best offensive upside guy available. A game changer, can run any power play, and can move up to forward if needed. All offence."

Last year Jackson had 13 goals for the Cougars. This season he has 22 points in 24 games and is only -2, which is pretty impressive on a team that's won only 8 games and has given up a league high 172 goals this year. Jackson was hurt in a fight during training camp, but his healthy now and has played every game since his return. The 20 year old would give any team a big offensive boost on the back end, but said team will have to create an over age spot to get him. I'm told a couple of teams from each conference are sniffing around the versatile 6.02 skater and the list should grow as the deadline creeps up.

Another western conference defenceman that might be appealing is Jeremy Schappert of the Seattle Thunderbirds. Like Jackson he's 20, but doesn't come with the same offensive arsenal. He was drafted by Moose Jaw, but has only played for the US division basement dwelling Thunderbirds. Here's a scouting report on him from another scout.

"Very good skater, a depth dman. Good swing guy as he can play up front as well. 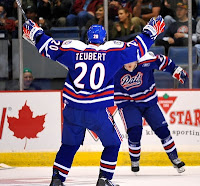 The wild card at the deadline might be Regina's Colton Teubert. The Pats loaded up a few weeks before losing Teubert and Jordan Eberle to the World Junior Championship. At the time they were in a playoff position, but they've now lost 9 straight and sit 10th and are 8 points back of the final playoff spot. Does Brent Parker unload Teubert and Eberle, or can the dynamic duo lead the Pats back to the pack?

Adding Sbisa also requires an import spot open on the roster. This would likely discount the Memorial Cup host Wheat Kings, and Vancouver adding Kytnar earlier in the year may take them out of the running, too (unless we saw Svendsen coming the other way in the deal). Calgary seems a logical destination given their position in the standings and import status. Given that we won't see Sbisa in the WHL next year, I don't see Preston hesitating to move him within the division, either.

You have completely overlooked Travis Hamonic. Every GM around the league is talking about this guy right now. Guess you missed the boat on this one. But you get an "A" for effort.

How about Van de Mosselaer?

Dean mentioned in the post prior to this one that Van de Mosselaer was expected to return to the Oil Kings as one of their 20-year-olds next season.

Hamonic sure would be of interest, if Moose Jaw is suddenly ready to pull the chute on the season.

Dear Anonymous, if that is indeed your real name.
I didn't include Hamonic as I think the Warriors will try and make a playoff push when he comes back. What you missed in the article is that all the teams I talked about are 5-6 points out of a playoff spot. Moose Jaw is just 2, Thanks for you kind remarks though.

On Schappert, I think he has a lot more offensive ability then people give him credit for. It is finally starting to come out. He is no Dallas Thompson, but this season, he joins the rush on quite a few occasions.

I would add in both Prab Rai and Stephan Wrag to the list for Seattle. Neither should be back next season. Rai is the main offensive threat, with speed and a very nice shot. Wrag is an import, but onyl 19, so not as difficult to move. He has NHL talent, when he wants to use it.

All he's saying is if you're going to do a story on potential defensemen available at the deadline why would you leave out the most sought after one? If you want to be a credible whl source than start acting like one.

If not, you're just another fan with a microphone.

1) Pretty sure that Dean is already a credible source so your comment is needlessly self serving.

2) Who says Hamonic IS available? (or was before the injury).

The Warriors are in a playoff position with several games in hand on everyone around them. They could get a ton for him but wouldn't Moose Jaw want to keep a potential league MVP on their squad for the playoffs?

I can see the benefit to both keeping or dealing him. I don't know that it's a given that he's available though. Do you? Are YOU a credible source "Anonymous"?

I didn't include Hamonic because I didn't think he was available. Maybe now that's he's hurt the Warriors might trade him because they might not be able to make the playoffs without him, but when healthy he wasn't going anywhere with them being so close to the post season.

Obviously you've never listened to our show, but maybe you should before you make uninformed statements about my credibility.

All we're asking for you not to mail in a post about available defenseman. Anyone can post this exact same thought on a random message board. Give me something that separates you from them.

And don't pump your tires about how credible you both think you are when the article was clearly missing some key ingredients.

What's next? Are you going to tell the sun rises each day or that winters are cold?

Go a bit deeper. Maybe you might surprise yourself.