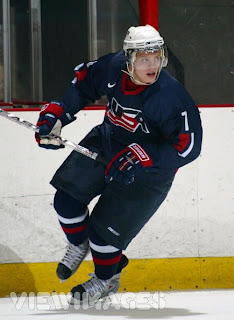 Like most of you, I was glued to the TV on Tuesday night as Canada and the United States battled for the gold medal at the 2010 World Junior Championship in Saskatoon.

Unlike most of you, I missed all of the highlights of the game winner because as soon as it went in, I was bolting out the door. I was watching the game with a few of the other TEAM 1260 personalities at The Shark Club just a few blocks away from the station but had to zip back to the studio because I was working the post game show with Corey Graham. I saw the goal live but didn't realize how remarkable a play it was until the next day.

You might not have any idea what I'm talking about so let me explain:

OK so by now this can't be considered a spoiler... everyone knows that the game went into overtime and that in the end, John Carlson beat Martin Jones short side to give USA the victory thus ending Canada's run at an unprecedented 6th consecutive gold medal. Really, when I watched it live I said to myself, "nice shot, beat him short side... I wonder if Jones was cheating over anticipating the pass" (you'll recall it was a 3-on-2 turned 2-on-1).

It wasn't until the next day after I was able to see a HD highlight pack that really revealed how awesome Carlson's goal actually was. Take a look and see if you know what I'm talking about... here's a hint: starting at the 1:53 mark, watch Carlson's eyes.

From just outside the blueline to the release point of the shot at the face off dot, Carlson is looking pass the entire way. Not once inside the zone does he even glance at the net until after he's already fired the puck. Of course Jones is expecting pass! How many guys outside the NHL can pick the short side while having changed his stance in full flight so that he was practically perpendicular to the target?

That is a brilliant big league shot.
Posted by Guy Flaming @ 5:46 AM

Oh how sweet it is!