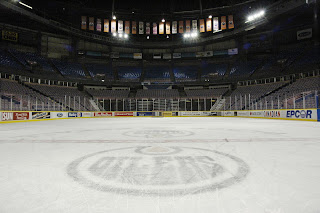 I'm not going to take any credit for this topic although every September it is something I kick myself for not bringing up in July.

No, credit for this goes to 'Bryan in Hawaii', regular listener to the show and known in cyberspace as "Bryanbryoil". Most identify him with his legendary man-crush on Robbie Schremp but occasionally he puts down the (insert the sterotypical Hawaiian object) and has a pretty solid idea. This is one.

Pre-season doesn't get too many people excited. Many season ticket holders give those duckets away or the seats go empty as the general hockey populace sees the exhibition games largely as a waste of time - "just get on with the season already!"

However, as Bryan represents, there is a growing number of die-hards out there that would love to see the pre-season action because it's a way to see the eventual NHL product coming together. Line combinations are experimented with, guys are often literally fighting for jobs and of course prospect junkies like ME... not want, need to see the youth in action!

So with that in mind and the support seen in Bryan's thread at HF, I contacted the Oilers to check if such an endeavour is possible or perhaps even in the works. The following quotes come from the organization via email and were received in the last two days.

Question #1: I have a question about pre-season TV coverage and if it's possible to have the exhibition games televised or shown via the internet. If not, why not? (costs, lack of demand, league policy, etc.)

Allan Watt (Oilers): Our National NHL partners are not interested in carrying local/regional games. Sportsnet is our Regional partner but they are contracted for 48 regular season games. That leaves Oilers PPV as a posibility and in past years we have produced Pre season games on PPV with marginal return - subscriptions barley covered our production and distribution costs and in most cases didn't.

Once again this fall we will explore pre season games on PPV and measure possible return against production and distribution costs - also measured against cannibalizing our pre season gate revenue.

All pretty reasonable but didn't touch on carrying the games online so I followed up with...

Question #2: Would there be any thoughts on 'broadcasting' the games on the Oiler website (video + Rod & Morley). I know a lot of people who have an interest in seeing the pre-season action and obviously I personally would like to see as many of the prospects in action as possible and won't get to the road games.

If there are complications to having that done, what would they be? I know the AHL games are all available online in this fashion.

Allan Watt: Good question and we are hoping to be able to facilitate. NHL broadcast rules, as agreed to by each member club, provide a defined home team extended broadcast territory - ours is Alberta, Sask, Man and the territories. No TV product (Oilers games) by any means including IPTV can extend beyond those boundaries. The NHL has new technology that will allow us to broadcast on the Web to specific addresses in our territory and we are planning to experiment with such broadcasts even as soon as pre season. Questions of who pays for production, the team or the end user remain.

So I'm not sure that will satisfy the fans who want to know if they'll be able to watch the exhibition games on TV or online. However later on in the thread at HF, Marc Ciampa (Oilers website guru) left this post: "I'm working on getting the pre-season games streamed live on the website - at least the home ones. The road ones (at Dallas, at Calgary, at Vancouver) might be more difficult. Vancouver did it last year so that would mean 5 of 7 pre-season games hopefully if everything works out? We're also working on getting streaming audio play-by-play of the prospects tournament. Stay tuned!"

At the very least it appears that the wheels are in motion. Die-hard fans, prospect junkies and hosts of hockey prospect radio shows are all waiting with fingers crossed. The Oilers do hockey right... I'm sure if it's possible, they'll find a way.

My questions for you the listener/reader: Would you pay to watch? If yes, how much would be reasonable? Would an online-only feed (video and audio) be good enough for you?

I look forward to your comments.
Posted by Guy Flaming @ 5:04 PM

I would definitly be in favour of streaming preseason games on the net, would that include commentary?

I'd love to see pre-season games, but reduced quality of viewing on the computer as well as reduced quality of play (it's pre-season) should translate into a reduced price point. I think 5 dollars or under per game is reasonable, and maybe you could pay a reduced rate to get all the games. If the price is too high, prospect junkies are just gonna congregate together and split the cost rather than buck up and watch it on their own. This translates into less revenue. As for canibalizing ticket sales, the few remaining tickets will get snapped up since the Oilers are such a hot ticket right now.

Blake: I think for someone to plunk money down to watch a game online, on their computer... it BETTER have play-by-play!

All the AHL games are broadcast online and I believe the radio commentary is just tied to it.

But again, I'm just asking - I don't work for the Oilers obviously so can't make any sort of comments on their behalf.

I definitely wouldn't pay to see them online. I might pay (indirectly) to see them on TV - if they were part of Centre Ice, say. I'd even cough up an extra 5 or 10 on top of the what, $230ish, just cos it's incremental. I doubt I'd want to pay the same $5-10 to see them though.

I would never, ever pay to watch a hockey game on a computer screen - seriously...

But I would go to a bar with my friends to watch a pre-season game... Many hockey poolies would...

The pre-season is where we get valuable information that wins us hockey pools...