Invasion of the Bodie Snatchers! 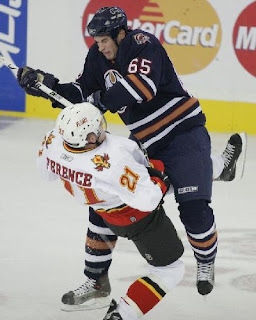 Nothing official yet but it appears the Anaheim Ducks have already or are about to scoop up former Oiler prospect Troy Bodie.

The one time Kelowna Rocket was not tendered a qualifying offer by Edmonton and so their 2003 9th round pick became an unrestricted free agent. Bodie played two pro seasons, one mostly in Stockton (ECHL) and then last season entirely in the AHL with Springfield.

I recently chatted with Bodie while he was in town at the Oilers prospect camp, nothing really in depth just a quick "Hey Guy, how's it going?". I did ask what he is currently tilting the scales at and was told close to 6'5 and 218 lbs. The Manitoba product has always been considered a long-term project but the fact that the once gangly, lanky and awkward Bodie has developed into a fairly dependable 3rd line minor leaguer is a testament to his character and work ethic.

Let's be honest, Bodie likely wasn't headed to the NHL anytime soon with the Oilers so the organization did what many fans have asked them to do with borderline prospects over the years; fish or cut bait. They cut Bodie loose but not after offering him a purely minor league contract, the same sort of one that goalie Glenn Fisher accepted back in May.

It's neither a blow to the Oilers nor a steal for Anaheim, at least not unless something unexpected happens, but it is a bit disappointing for one reason. New Springfield head coach Jeff Truitt coached Bodie for 5 of the last 6 years including all four in the WHL with the Kelowna Rockets. Truitt obviously got to know all of the Falcons players last year but having that long-standing relationship would have been an asset heading into 2008-09. Sure Tyler Spurgeon is still in the system but at last report, the Edmontontian still is feeling the effects of last year's season ending concussion.

Bodie was well liked by the players, was willing to step up and drop the gloves, played hard, took the body and was a beast in the corners. His spot can be filled with other large bodies like Geoff Paukovich or David Rohlfs but it's safe to say Bodie's void will be felt off the ice and in the dressing room.

Bodie was a good soldier, did everything that was asked and expected of him and was determined to turn himself into a professional hockey player. He was successful. Personally I hope he finds more success now that's he's moving on.
Posted by Guy Flaming @ 6:05 PM

I caught a couple Springfield games this year and I liked what I watched from Bodie actually. He's certainly a better prospect than a guy like Sistito, IMO. I think he will make it down the line in a 4th line banger role.