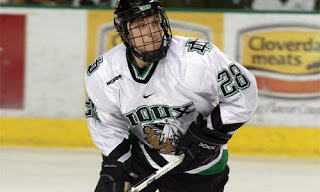 The play could have ended Bina's hockey career and certainly has had a lasting and negative impact on Paukovich's play. Emotions from the incident carried on for years although bubbling under the surface, that is until Edmonton training camp in 2007 neared and former UND captain Matt Greene met his fellow Oiler prospect for the first time. 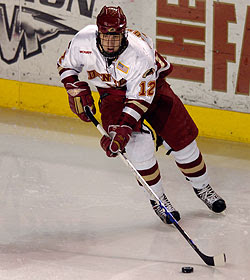 Ironically, 3 years later Robbie Bina and Geoff Paukovich may very well be teammates after the former signed a minor league contract with the Springfield Falcons.

I can't take the credit for breaking this story because The Pipeline Show's pal in North Dakota, Brad Elliot Schlossman, tipped me off tonight via e-mail and he'll have the full story in tomorrow's Grand Forks Herald. Once that comes out I'll provide a link.

However, if you want a bit of history on the subject, here's the story I wrote for HF back in June of 2005.

Expect to officially hear about the minor league signing of Bina sometime tomorrow.