One To Watch: Ottawa Senators

-
This one was easy. Not that the Senators pool of prospects is shallow, not at all in fact, but for me there is one guy that is beginning a huge chapter in his career this year that I can't overlook.

No, it's not any of the OHL picks in recent years although I'm not going to criticize anyone who has taken a shine to Cody Ceci, Shane Prince, Stefan Noesen or Matt Puempel. All are solid prospects in their own right.

Swedes Mika Zibanejad and Robin Lehner? Worthy but also neither are the guy I am thinking of. It's not the Love Expert, Louie Caporusso, or Frenchman Stephane Da Costa either.

My pick as one to watch for the Senators is a former King. 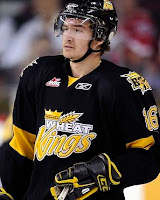 It is still amazing to me that Mark Stone was a 6th round pick for the Senators in 2010. Knowing what we know now, it's almost impossible to believe that he was available that late but you have to go back to that year for perspective.

Here's a guy who only played 39 games due to injury and even though he was productive, there were those who speculated that Stone was riding the offensive coattails of Brayden Schenn (PHI), Matt Calvert (CLB) and Scott Glennie (DAL).

As my partner on The Pipeline Show, Dean Millard, often points out, it was Stone who had actually moved ahead of Glennie on the depth chart during the Memorial Cup.

Stone was a great selection by Ottawa but at the time is was far from a slam dunk. Since the though, wow... no one can question the choosing of a guy in the 6th round who scores 106 and then 123 points in the WHL the following two years.

There were still a lot of skeptics after Stone's 106 point season in 2010-11 but his summer camp with Hockey Canada really solidified his status as a top prospect. Stone seemingly scored at will during the camp and intersquad games. He got off to great start in Brandon and was an easy selection to the 2012 WJC team.

On a club loaded with flashy offensive weapons it was Stone who consistently found the back of the net. There are almost no similarities between Stone and another Canadian WJC sniper Jordan Eberle except one: an uncanny instinct to know where to go in the offensive end where the puck will eventually land on his stick. He ended the tournament with 7 goals and 10 points in 6 games, team highs for Canada in both categories.

While Eberle likes to perch just off the sides of the slot, Stone plants himself at or near the top of it and uses his strength to muscle shots through traffic and in.  His reach allows him to collect rebounds and tuck them around bodies and into the net. How many times did we see him in the WJC where he'd be causing problems in front of the net then simply drift back in the slot to create some space, get the pass and one time in for a goal? (Like this)

Stone is a beast, and although not the speediest skater he wins battles in front of the net and that leads to goals. In that sense, I think there is some Dave Andreychuk in Mark Stone.

Once eliminated from the WHL playoffs, Stone joined the Senators in New York for a critical post season clash with the Rangers. Stone played less than 9 minutes but collected an assist in the contest.

Of course he's going to have to earn his roster spot in camp but I don't know how long Mark Stone will be out of the NHL for. He's one of Ottawa's biggest forwards and few current members of the Sens produced at the rate Stone did at the same age.

I'd be interested in hearing from Ottawa fans about this because I have a hard time imaging a scenario where Stone does not make the team out of camp. That's why Mark Stone is my pick as "One to Watch" among Senators prospects for 2012-13.
Posted by Guy Flaming @ 6:00 AM

I think the main player you are overlooking, Guy, is Jakob Silfverberg, who I think Stone would have to outplay in training camp in order to make the Senators. While Stone and Silfverberg are similar in that they are both right wings with natural goal scoring instincts and underrated playmaking ability, Silfverberg's accomplishments against professionals clearly trump Stone's junior-level dominance. Moreover, Silfverberg is quicker and more advanced in his all-round game as well, and therefore the conventional wisdom is that Silfverberg is more NHL-ready.

While Ottawa's forward group is short on NHL experience, when you count up the one-way contracts currently being held by young role players, there are actually few openings on the NHL team this year. Looking at it right now, one, maybe two, rookies could crack the line-up, and Stone would have to compete with Silfverberg, Zibanejad, Da Costa and others (Mike Hoffman and Andre Petersson most notably) in order to claim a spot.

As it stands now, Silfverberg has basically been pencilled in for a top six spot, and the organization actually suggested at last year's camp that he was already NHL-ready before he returned to Brynas, where he subsequently dominated the SEL, winning awards and breaking records. The odds of Stone outplaying Silfverberg are, in my opinion, slim, and I would argue Silfverberg has to play himself off the team, whereas any other prospect, including Stone, has to play themselves on.

However, a strong camp and Stone could easily push ahead of other guys like Zibanejad, and maybe bump less talented players like Erik Condra down as well. It is certainly possible, but a mid-season call-up when injuries hit (an inevitability with Peter Regin, Guillaume Latendresse, Milan Michalek and others in-house) is more likely. That will more likely be Stone's real chance to force the club's hand, as the Murrays are typically stubborn in training camp when they have it in their mind that a top prospect is pencilled in to start the year. Right now that player is Silverberg, not Stone.

Sens fan here. Stone is a great talent, and our management is very high on him. He will go as far as his skating will take him.

However, his skating is still an issue. He's made great progress in his skating (much better than his draft year), but it will prevent him from making a team that relies heavily on the 200 foot game and transition offense.

To add, he's competing for a spot with Silfverberg, the season and playoff MVP in arguably the second best league in the world. I don't think he'll be making the team over Silfverberg until he proves himself in the AHL.

don't see Stone making it as he has to battle Zibanejad for a RW spot, and Zibanejad is a much better skater, already played in a pro league, was a high draft pick, and has a bigger caphit.

Stone will probably not be in the AHL for too too long but I see him needing some time to prove he can skate with the pros and dominate for a bit. Just not enough room on the roster right now.

to the previous commenters, he isnot battling Silfverberg. The two play different positions. Silf is a LW. Silfverberg has a spot, he isn't competing with anybody else. It's between Stone and Zibanejad.

Awesome comments guys/gals... that's why I threw out to you. I knew you'd have some great thoughts on it.

Thank you for taking the time to read and to comment.

While you might be right that the real competition is between Zibanejad and Stone, Silfverberg does play both wings. He's a right-handed shot and suited up on the right side in the playoffs last year with Milan Michalek and Jason Spezza. If Silfverberg is penciled in for a top six forward spot, it's probably on RW on the top line, where Bobby Butler often played last year. With Alfie, Chris Neil and Erik Condra also locks for RW spots, it is actually LW where things are more wide open, particularly considering Peter Regin and Guillaume Latendresse are injury risks.

This may also work against Stone, unless he is able to play LW and RW. Whereas Silfverberg can play both wings, and Zibanejad both C and RW, Stone may be more restricted to the right side. To be honest, the only way I see two of these rookies making the club out of camp is if there are injuries, which is a distinct possibility.

Zibanejad can play all 3 positions, but he is a winger now.