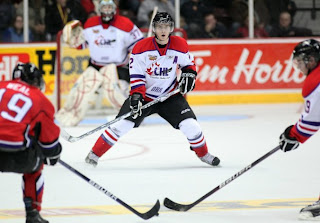 Each year The Pipeline Show is excited to bring you entries to our blog written by players in their draft year and 2009-10 is no exception. So far we've heard from Edmonton Oil Kings defenceman Mark Pysyk and Prince George Cougars forward Brett Connolly.

Today we're able to bring you the 4th chapter in Pysyk's ongoing series that we've called 'On the Mark'. The member of the Edmonton Oil Kings represented the team at the annual CHL Top Prospects Game in January but missed the last two months of the season and the World U18 Championship in Belarus thanks to a cracked bone in his foot. He did attend the NHL combine in Toronto and that's where we pick things up with Pysyk this time... (Photos: Andy Devlin/Edmonton Oil Kings)


Hey everyone, it's Mark Pysyk here a day before leaving to the draft.

The NHL combine was about a month ago and it was the hardest week of my life. I had 24 interviews with teams while I was there which made for some very long and stressful days. I had 12 the first day I was there and I took my suit off after and it had never been so sweaty.

People told me it would be a hard week but I didn't expect it to be as hard as it was. The fitness testing was very intimidating. There were probably 60 people watching while all the boys did their fitness testing which would obviously be scary. There were two bike tests - one that lasted 30 seconds and you bike as fast as you can and after that one many of the players, including myself, puked. I remember I was just holding it back then looked in the garbage can already full of puke and that put me over the top and I couldn't hold it back. The second bike test was the one where we had a tube in our mouths which is a little weird for the first bit but after you got used to it wasn't so bad. 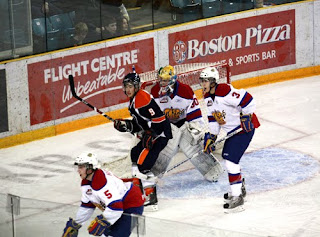 Going into the draft this weekend I have quite a bit of family coming to support me which is great. I have never been so nervous about anything in my life and it is so exciting as well. Its the NHL draft! I have to pinch myself sometimes to make sure I'm not dreaming because this is what every young hockey playing kid wants to experience and I'm able to do it this weekend. The draft is obviously just a small step towards being a full time NHL player but it is something that is very exciting for me and my family.

Mark Pysyk is ranked 7th overall by NHL Central Scouting in their Final release, TSN's Bob McKenzie has him slotted 20th overall. The 6'2, 178 lb defenceman ended the year with 7 goals, 17 assists for 24 points in 48 games with the Oil Kings. Pysyk was Edmonton's first pick in modern franchise history, selecting him 3rd overall in the 2007 WHL Bantam Draft.
Posted by Guy Flaming @ 2:28 PM