Here is how the NCAA Top 20 appeared before Firday's games and the results from those who saw action: 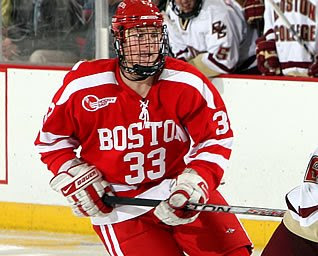 Most of the top teams in NCAA hockey had the weekend off because some of the Conference playoffs began and they got to watch from home with their feet up. Not the case for Boston University who tackled Providence in the last series of the regular season. The Terriers spanked the Friars and may actually have had their feet up while doing it. 8-2 and a 3-0 shutout sealed the deal for BU on their quest for the Hockey East regular season crown. The loss was also the final game for the Friars this year as they don't qualify for the HE Conference playoffs.

Boston College reminded Northeastern that despite their record this year, you shouldn't ever look past the Eagles. BC downed Northeastern by a 4-1 score on Saturday on the strength of 3-point efforts from Brock Bradford and Cam Atkinson. Boston College scored four unanswered goals to beat the Huskies of Hockey East in the final tune up before the playoffs begin. 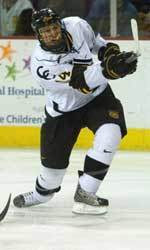 In Denver it was a classic 1-game grudge match between bitter rivals as the Pioneers hosted Colorado College. The final result was a 1-1 tie as senior Chad Rau tied the game with under 2 minutes reminaing to help the Tigers hold onto a home date in the WCHA playoffs.

Wisconsin and North Dakota split their series at Madison while the Golden Gophers also traded wins with Michigan Tech. The big WCHA upset for me was the Seawolves of Alaska-Anchorage sweeping Duluth in their own barn. The WCHA Bulldogs will be lucky to stay in the top 20 with those two losses.

An interesting battle between #7 Vermont and #9 New Hampshire ended with each team getting a victory. The two teams combined for 21 goals over the two matches with UNH winning 6-5 in OT and the Catamounts taking the Friday tilt by a 6-4 score.

In the CCHA playoffs, Nebraska-Omaha swept Ferris, Western Michigan took out Lask Superior in 3 games, Ohio State destroyed Bowling Green and Northern Michigan swept Michigan State ending the year for the Spartans. With the Spartans out the Jeff Petry watch has officially befun for fans of the Edmonton Oilers although from what I have dug up so far... it's looking more likely that the top defensive prospect of the NHL club will return to MSU for a junior season.

All four of the ranked ECAC programs had the weekend off as they watched the results of the opening round of their Conference playoffs. Yale, Princeton, St. Lawrence and Cornell now know who they will each face next weekend in Round 2. Brown and RPI were underdogs during Round 1 but pulled off the upsets over Harvard and Dartmouth respectively. Qunnipiac and Colgate went to overtime in a third and deciding game before the Bobcats skated away with the win thanks to Brandon Wong's game winner.

Speaking of the conference playoffs, if you want an idea of who plays who, head over to USCHO.com via THIS LINK and check out the schedule.
Posted by Guy Flaming @ 9:35 PM