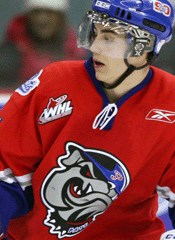 Just watching the Springfield Falcons take on the Worcester Sharks right now on the NHL network. There aren't a ton of reasons to want to watch the struggling Falcons right now, but Jordan Eberle is one. So far so good for the 2008 first rounder of the Oilers as he helped set up Ryan Potulny in the first period. It was Potulny's 31st goal and Eberle's first pro point. Currently it's 1-1 after 1. Eberle took a pass from Ryan Stone in the slot, put it towards the net where Potulny finished at the side of the cage.

Guy and I were down at Rexall place today as the Oil Kings met with the media one final time. I was working for Global Guy was there for TPS and the TEAM 1260. Here are some of my thoughts and here is the link to hear all the one-on-ones from the morning.

I'm really looking forward to seeing Mark Pysyk in 2 years and even next season. The guy played more than 20 minutes a game as a 16 year old, steadied the blue line and ran the power play. Very similar to Dion Phaneuf at that age with Red Deer.

Contrary to popular belief, the Kings did win a playoff game. They beat PA to get into the post season. That, combined with their 4 game lesson from the Hitmen should make the club better prepared for next season.

Remember Brenden Dowd, Jeff Lee and Brandon Lockerby next year if the Kings have a good playoff run. They are this year's 3 - 20 year olds that ended their WHL careers Wednesday night, but helped build a winning tradition in Edmonton this year.

Speaking of 20 year olds, the Kings are hoping they have one in net next season. Torrie Jung told me he expects any contract talks with Tampa to begin after the NHL season. The best case scenario for Edmonton is that Jung signs with the bolts and they return him for his overage season with Edmonton. If the Lightning don't sign him, why not the Oilers. They can keep a watch on him and after next year, Jeff Deslauriers and Devan Dubnyk should be ready to mind the twine with the big club and Jung could slide into the AHL spot.

A number of guys took advantage of increased playing time because of the many injuries suffered by the Kings this year. Kieren Friesen, Tyler Hlookoff, Michael Burns, Henrik Tervonen and even midget call up Travis Ewanyk from St. Albert gained valuable experience.

Rocky Thompson's contract is up after this year, and Steve Pleau is in the option year of his, expect them both to be back behind the bench when the season starts next year. 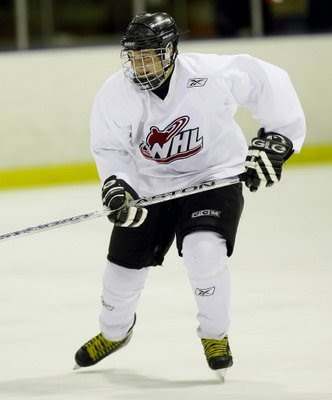 What to expect next year? Michael St. Croix will be looked to for offence, even though he'll only be 16. His midget team won the Manitoba AAA League playoffs this year, with St. Croix putting up 20 points in 8 games. Watch for him at the Telus Cup this year. Fellow Oil Kings draft pick Devin Ballness had 34 penalty minutes in 10 games with the Eastman Selects during the same post season run. Watch for St. Croix at the Canadian Midget championship starting April 20th in Selkirk, Manitoba. TSN will air the final game on April 26th at 5 PM mountain time.
Posted by Dean Millard @ 5:51 PM