One on One: Alex Plante 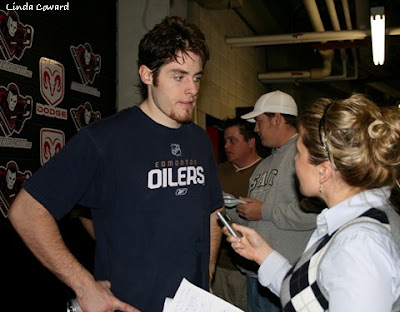 This is one of my favorite pictures of Alex Plante. It was taken after a Calgary Hitmen game at the Saddledome and despite his surroundings he defiantly adorns the colours of the villainous NHL team up the road. Talk about being behind enemy lines!

There is a lot of pressure that goes along with being a first round pick, even more so when you're taken by a Canadian team because you're under the microscope of the fanbase from draft day on.

Plante was Edmonton's second choice at the 2007 NHL Entry Draft and its been a selection that Oiler fans have scrutinized ever since. Many fans felt the Oilers were going off the board when they chose the Calgary Hitmen blueliner. Those draft day critics fed off Plante's injury riddled 2007-08 season and used his problems as evidence of their own personal justification for being against the Oiler draft decision. 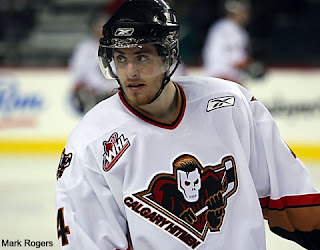 Many of those critics have been quieter this year as Plante has rebounded in fine fashion as a key part of the machine that the Hitmen have become. The #1 ranked team in the CHL is loaded with players having career years including Plante who has set personal highs in every category including points and penalty minutes.

On Monday night Dean Millard was able to speak with Plante after the Hitmen captured game 3 of their opening round series against the Edmonton Oil Kings. In the TPS exclusive, Plante discusses everything from the team-bonding mohawks the Hitmen have adopted to the much-publicized training camp hold out, his own personal development this year and his possible future with the Edmonton Oilers as he awaits a contract offer.

I'll have to listen to this when I get home; I have a dual interest in Plante as both a Hitmen and Oilers fan. Thanks.

(I love that junior players wear their NHL team's garb after games. Martin Jones wore an LA Kings shirt out to get his head buzzed during the cancer fundraiser last month. Wonder if the Oilers feel silly yet for wasting a pick on Jordan Bendfeld with the seasons Jones and Brandon Kozun have had?)

I like Kozun a lot but at that size he's not interesting to some teams despite his offence at the WHL level. I spoke with one scout at the rink on Monday about him in particular (not an Oiler scout) and he said he "wouldn't be surprised if someone gambled on him this June but it wouldn't be his team and it wouldn't be before round 4"... his words, not mine.

It's too bad because I like Kozun and I hope he does get a chance. Even if he doesn't get drafted, someone will invite him to camp for a look.

Oh, I agree that his size is a problem, and unless he hits a late growth spurt, it will continue to be a problem. I just don't think that's necessarily a hamper to an NHL career (he looks up to Martin St. Louis -- figuratively for sure, but possibly literally, as well). His willingness to go to the corners and the front of the net might be his undoing, but it might make his career, too, especially if he can continue to outmaneuver the guys who are out to clock him in his unfortunately-positioned melon. I just think taking a flyer on a shrimp in round 7 is better than blatantly blowing a pick on an overage goon who will never contribute at the NHL level.

Then again, Kozun was also a young 18 in his draft year, having just turned 19 earlier this month, so for all intents and purposes this his 18-year-old season, and I'd be stunned if no one took him this time around with how he's shot the lights out in the least protective of the three leagues. Sad it won't be the Oilers.

Also, congratulations to the Edmonton Oil Kings for an excellent sophomore season. While the series went pretty much as you guys predicted, I'm honestly proud of them for making it this far in just their second season, and I was happy that the Hitmen got to be their first opponent, for the sake of being able to witness their first-ever "proper" playoff game in person. Plus, it just felt like the "right" story to have Calgary-Edmonton be the new Oil Kings' first series.

(As an aside, I see the crowd nearly doubled for tonight's game; perhaps Game 3 was an anomaly.)