Workin' For A Livin'

Training sessions in California with Oilers fitness guru Chad Moreau have been going on for a couple of weeks and this year several Edmonton prospects are taking part. 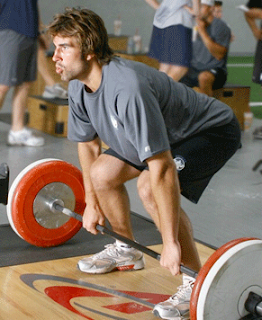 Zack Stortini (picture courtesy Back To Function) took part last year and it clearly paid off for him.

Looking to share in that success are a half dozen Oiler prospects who played in the minors this past season. Goaltender Devan Dubnyk, defenceman Alex Plante and forwards Rob Schremp, Ryan O'Marra, Geoff Paukovich and David Rohlfs.

All are players the organization has targetted for speed and conditioning improvement. Plante is coming off as injury plagued campaign with the WHL's Calgary Hitmen and is taking full advantage of the summer to train and recover some of that lost time. Both Paukovich and Rohlfs are in the 6'4 and 230 lbs range so conditioning and mobility are keys for their future. Both Schremp and O'Marra have dedicated themselves to being in top condition for training camp in the fall after having reduced workout time last summer due to knee injuries.

All are still in California with the exception of O'Marra who left for personal reasons. The soon to be 21-year-old will be in Edmonton for mini-camp which begins June 1st.
Posted by Guy Flaming @ 11:22 AM

Great job guys. Out of curiousity, have you heard anything new about the camp??? Has O'Marra returned??? Which veteran players are at camp this offseason??? Thanks, and keep up the good work, BBO

O'Marra is in Japan on a family holiday and from all acounts had some great work outs when he was in California.

Thanks for the info Dean. Great to hear that O'Marra will have an advantage heading into prospect camp after going to California. Hopefully Plante will have a solid camp as well to get his confidence up.