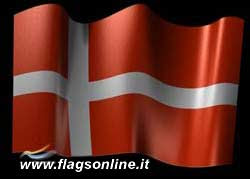 How far down your list of developing hockey powers is Denmark? Yes Denmark, the home of the Little Mermaid, Vikings and Metallica's drummer is also slowly becoming a legitimate hockey nation.

OK before you start in on me here, I'm not suggesting that the Danes are going to win the 2010 Olympics or win the next World Junior tournament. What I am saying is that like Switzerland, Germany and even Latvia... Denmark is getting to the point of credibility in the tier below the true hockey power nations.

Canada, Russia, Sweden, Finland, the Czech Republic, Slovakia and the United States have been the 7 hockey powers for the last couple of decades and really, Slovakia hasn't been a member in the club for all that long and not on an annual basis either.

But back to the Danes and why I believe they're ready for permanent promotion up the ladder. Just look at the number of Danes being drafted in the last 5 years alone. Sure they might not be everyday NHL players just yet but all are still with the teams that drafted them and many have played in the NHL already, are on the farm or are still playing junior. 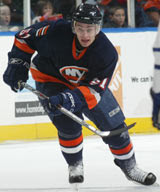 In 2002 the New York Islanders drafted Frans Nielsen in the 3rd round and has played 31 NHL games to date but appears in the loop for a regular job next year. In 102 AHL games with Bridgeport, Nielsen has 30 goals and 82 points. 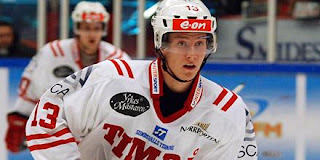 Two years later a pair of Danes were drafted starting with Peter Regin by Ottawa in round 3 and then Jannik Hansen by Vancouver in the 9th round. Regin has completed 3 straight years in the Swedish Elite League but rumors are he may be ready to make the change to North America and the Sens still own his rights. He compiled 31 points in 55 games with Timra, 3rd best on his club.

Hansen has spent the last two seasons in the AHL with the Manitoba Moose and has 77 points over the two seasons. Many felt that Hansen would crack the Canucks roster last fall but an injury kept him on the farm and he lost his spot.

There were 3 players drafted in 2005 that have ties to Denmark. Morten Madsen was plucked by the Minnesota Wild in the 4th round and after scoring 100 points in the QMJHL with Victoriaville, he spent 2007-08 in Houston with the AHL Aeros. Although he only scored 3 times in the AHL, the 32 goals that he netted with the Tigres suggest an offensive upside yet to be tapped into.

Russian born but Denmark raised forwards Kirill Starkov and Slava Trukhno were drafted by the Columbus Blue Jackets and Edmonton Oilers respectively. Starkov spent a season in the WHL with the Red Deer Rebels and had 71 points in 72 games. However, this past season the Yekaterinburg native bounced between the ECHL and the AHL but produced with both teams. 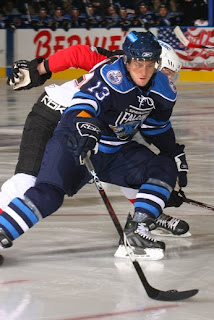 Trukhno was a dominant force in the QMJHL and had 3 straight 25-goal seasons and ended his junior career with 106 points last season in Gatineau. This past season he developed slowly in the AHL with Springfield before having a burst of production late in the year. 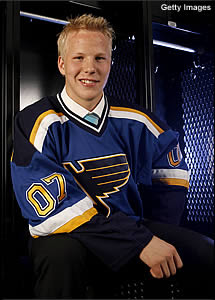 Last June the St. Louis Blues stepped up and made Lars Eller the highest drafted player from Denmark when they snapped him up with the 13th overall pick. Eller split his time between the SEL and the top junior league and may be a player who comes to the CHL next season or plays a bigger role in the SEL. 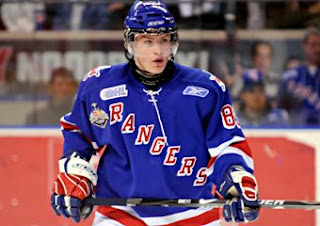 The trend is going to continue this year when Mikkel Boedker of the Kitchener Rangers is selected, likely in the top 10. His head coach Pete DeBoer recently told us during our 3rd Annual Memorial Cup Coach's Show that he felt Boedker was the most NHL-ready player in the draft next to Steven Stamkos and predicted that he'd be in the NHL next year. Boedker was a standout at the Top Prospects Game and has been all year with the Rangers too and certainly has been in the sights of scouts all season. Vetern blogger James Mirtle mentions Boedker a couple of times at his site recently (link). 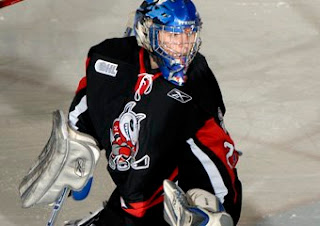 Lesser known defenceman Philip Larsen will also get drafted after playing in Sweden this past year. Both he and Boedker were on Denmark's entry at the 2008 World Junior Championship in Prague.

There is also OHL netminder Sebastien Dahm worth mentioning. Dahm has now completed his junior eligibility and will likely get pro offers from both sides of the Atlantic. The 20-year-old has played for 4 different OHL teams and has been a populare trade deadline asset for teams looking to add a stronger netminder.

Collectively that's a lot of talent and worthy of respect. This is a group that should be able to contend with the Germans and the Swiss for the next several years and if development back home continues, who knows how far the Scandinavian country can go. Maybe 15 years from now we're looking at Denmark on a level close to or equal with Finland and Sweden.
Posted by Guy Flaming @ 3:20 PM

The Danes are certainly making inroads internationally. They've come a long way since the incredulous 47-0 loss against Canada in Feb 1949.

Kim Staal was one of the first Danish hockey players I recall knowing about. He has laid the path for other Danes. Morten Green and Peter Hirsch are others who've had solid careers in Sweden.

The domestic league is on par with that of Norway, (maybe a bit less). Even Italy's league or perhaps England are comparable.

My take is Danish hockey is a tougher breed as compared to Swedes, Finns or Russians, but still with a technical facet to their game.

Denmark is certainly on the hockey map. Are countries like Hungary, Korea or Japan next? (There is a Japanese player in this year's Memorial cup)

The global scope of hockey, and levels of competition, is nothing but better and enriching for the game!