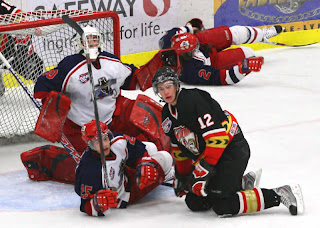 Each Day of the Royal Bank Cup, Camrose Kodiaks forward Joe Colborne, who's predicted to be a first round NHL draft pick this June will give us a first hand look at what it's like playing for a National Championship. (photo courtesy Camrose Kodiaks) Here's Day 7, Thursday May 8th, 2008:


The fun and games are now over, and the playoffs begin! A 6-1 win over the Oakville Blades a few hours ago allowed us to finish the round-robin undefeated and confident heading into semifinal Saturday.

Nigel [Dube] and I woke up today about 9:30 and went for a quick pre-game skate, where we found out that neither of us would be in the line-up for tonight's game. Not exactly the news either of us was looking for, but with 1st place already locked up, it provided us an opportunity to rest up for the playoffs. That said, sitting out a game really sucks no matter what the game means!

It was hard resting for a game that I knew I wouldn't be dressing for, but Boris has hammered into us for the entire year to "expect the unexpected", as you never know what injuries could occur in pre-game warm up or in some other way, so we approached it in our usual way with a pregame nap and meal. As it turned out, Dave unexpectedly had to drop out of the line-up, allowing Mike Connolly (who also had been told he would be sitting out) to slide back into the line-up. Luckily, he had prepared too and played a great game, scoring a shorthanded goal and making a great set-up on a [Jesse] Todd shorthanded goal. I guess the coaching staff does know a thing or two about the game!

On that note, I forgot to mention that with our win yesterday, Boris became the Head Coach with the most wins in Royal Bank Cup history! Of course, he wouldn't mention it to anyone, so I thought I would try to spread the word.

It was great to see [goalie] Mathieu [Larochelle] play in front of his parents for the first time in 2 and a half years! He certainly didn't let them down, as he bailed out our powerplay a few times during the game with brilliant saves. ( I noticed it is much easier to beak the powerplay when you are not on it!) Just as nice, was to watch Geoff Peet and Clayton Jardine play solid games as well. I am sure they will both be playing huge roles for the team next year. Finally, we almost witnessed an almost unheralded act in today's game. Near the end of the third, Andrew MacWilliam let loose a shot that appeared to be going towards the open left corner (of the net, not the actual corner where Mac usually shoots it). However, once again, it was not Mac's night as the puck deflected just wide.

But as nice as today's win was, our job is far from over, so I guess I need to get some sleep to prepare for Saturday.
Posted by Dean Millard @ 11:17 PM