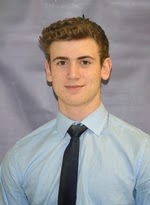 Our next guest player/writer has submitted his first entry to his 2015 Draft Blog. Following in the footsteps of Joe Colborne who blogged with us while a member of the AJHL's Camrose Kodiaks, Luke Orysiuk introduces himself today to our audience.

The 17-year-old defenceman skates with the Drayton Valley Thunder and is in his second Alberta Junior Hockey League season. The Edmonton native has both WHL and NCAA options down the path to professional hockey.

After the jump, the first installment of the Draft Season Blog from Luke Orysiuk.


Hi, my name is Luke Orysiuk and I play for the Drayton Valley Thunder in the AJHL.

I am an assistant captain and a right handed defenceman. I am currently in my second full year with the Thunder. I have been playing hockey since I have been six years old and it is something that I am really passionate about.

When I think of the different teams I played for before junior hockey two years really standout in my mind. My first year of Bantam hockey and my REM15 year.

In my first year of bantam hockey I played for the CAC Real Estate Weekly Bantam AA team and we had a great year and won a lot of close games. We had a very young underdog team but became City, Regional and Provincial champions. We had a really good group of guys on that team and we always seemed to find a way to win. Our final game went into second overtime and was a complete battle and no one on either team had anything left in them when we scored the winning goal.

This was the year that I started getting really serious about hockey. Manny Schmidt from Link Management started to work with me that summer and I started going to the gym 5 or 6 times a week. My trainer Jean-Francois Dufour from A New Level Fitness helped me increase my speed and strength and I continue to work with him when I am in Edmonton.  I love working out in the summer and in-season when I have time.   This summer I got a chance to work with the skating coach for the New York Rangers and a group of pro players thanks to Manny.

My REM15 year was another great year and was a bit of a breakout year for me as I led the League in scoring for defencemen and I was rewarded by being named the Defenceman of the Year for the League as voted on by the coaches of the other teams.  We had the best record of all the teams in the league that year but unfortunately fell short in the playoffs.

I was fortunate enough to get an invitation to the Portland Winterhawks Camp when I was 15.   It was really cool being partnered up with Seth Jones for one of the the Neely Cup intra squad games and it was also a bit of a lucky break because the other teams always seemed to come down my side instead of Seth’s and it allowed me to show my skating, positional play and ability to move the puck.   It was also a real eye opener to do one on one drills with guys like Ty Rattie as well as a handful of NHL players that were at the camp getting ready for their NHL camps.

Last year when was 16 I went to the Portland camp again and tried out for some AJHL teams. Mike Johnston told me they were going to list me however I was listed by the Victoria Royals first. I told Victoria that I would attend their fall camp the following year.

I decided to play for the Thunder in the AJHL last year as I liked the coaches, the players, and the coaches seemed really interested in me especially after their second camp with all the vets.   It was a big decision because I was only 16 and there was no one else my age on the team and I had to move in with a billet family that I didn’t know at all.   But I wanted to play Junior hockey and get as much playing time as possible so when I got the chance to hopefully  play a lot for the Thunder as a 16 year old I took it.

I have been really lucky in that my billet family in Drayton are fantastic people and totally spoil me!  They have a young son (Cadeam) and young daughter (Keeyn) that I am always doing stuff with when I am not with my team or in school.  My mini sticks skills have definitely improved!
My first year in Drayton was great and my ice time kept increasing throughout the year.   My Coach Mike Mueller really spent a lot of time with me and I learned a lot from him and the other coaches through-out the year.  By the end of the season I was pretty much getting as much ice as I could get and was awarded rookie of the year with my good friend Brett Smythe.

Being away from home for the first time and finding time for school was tough especially because you miss so many classes because of hockey and I can’t sleep on the bus.

I went to Victoria's Camp this summer and I was really impressed with their organization but when they offered me a contract I felt that the AJHL would be a better fit for me and my development as a defenceman.   I was glad I went and that the WHL is still an option for me but I am pretty confident that the NCAA route is better for my development.

This year I am back with the same billet family and I have had talks with several different schools including a couple of Ivy league schools.   I was surprised at how many NHL drafted players are on some of these NCAA school rosters.   I have also been lucky in that four NHL teams have made the drive out to Drayton or to our other games to watch me play and talk to my coach.
For now my long term goal is to take things one day at a time and go as far as I can in hockey and if I can get a education while doing it that would be even better.

This year our whole team is working really hard and we are having a pretty good year so far with a lot of games in front of us. My goal for this season is to do whatever I can to help our team win a championship.

One change from last year is that our team was given a training program from the trainer of the Colorado Avalanche. One of our coaches is brothers with Nick Holden on the Avalanche and that is how we got the training program. It is pretty cool to know that we are doing something similar to what the pros are doing.

I really don’t have much for hobbies as I am kept pretty busy in the summer and while with my team in Drayton. I do like golfing and my family and I had a great sailing vacation last summer which I hope I can do again this summer.

Thanks for taking the time to read my blog and thank you to The Pipeline Show for asking me to do this. This is my first blog post so feel free check for updates if you are interested and if you have any questions you can reach me on twitter at (@LukeO_74).

Luke Orysiuk is a defenceman with the AJHL's Drayton Valley Thunder. The 5'11, 180 lb blueliner has already matched his 2013-14 totals with 7 points and 25 PIMs through the first 25 games of the year. His WHL rights are held by the Victoria Royals and thus far he has not committed to a NCAA program.
Posted by Guy Flaming @ 2:57 PM

NCAA is the smart route. Lots of options down the line as you continue to play past 20 years of age. You cant play after 20 in Canada unless you are playing pro or beer league.
Good Luck.