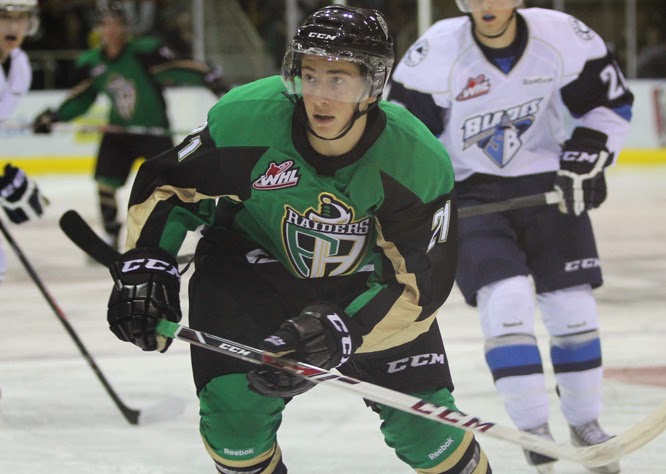 My name is Matteo Gennaro and I am 17 years old, playing my second season with the Prince Albert Raiders.

I am from a city, just a few minutes north of Edmonton, called St. Albert. Growing up there was great, because St. Albert is a bit of a “hockey town.” Although raised there, I actually lived my first 4 years in Edmonton, so I began playing my Initiation hockey for the Edm. Knights of Columbus at the age of 3. My mom says that I would still need “naps” back then. We have pictures, but most of what I remember is that I scored my first goal on my own net. By the age of 4, I have been told that I was already showing a strong passion for the game, never complaining about early ice slots, practicing a skill until I got it, and always excited and ready to go.

Moving back to St. Albert, I signed up with SAMHA, and began skating with friends and coaches that I am still in contact with today.

My next two years of hockey at the Atom level were very successful.  We won a Tier1 Championship, a Provincial Championship, Minor Hockey Week, and a few other tournaments. Finishing second year Atom, I was invited to try out for Team Brick, a team comprised of the top players in Alberta. As captain, I learned a lot and enjoyed getting to play with old rival players I used to face during winter and spring seasons.

At this point, it was becoming clear that hockey was really important to me, and something at which I excelled. I played two strong years at PeeWee as a ‘AA’ St. Albert Saint.

As the competition level of hockey I played increased, I increased my level of commitment to the sport during off season and summers with fitness and skill training. Fortunately my dad was able to put me in different programs, with good trainers and coaches, and I was always able to train with guys I knew and older, higher level players. I liked the challenge. First year Bantam, I played for the ‘AAA’ St. Albert Sabres, winning a well played tournament in Abbottsford, B.C.  Second year, we enjoyed playing in tournaments like Medicine Hat and the John Reid. I was selected 41st overall to the Prince Albert Raiders in the Western Hockey League bantam draft.

I played one year of Midget AAA Hockey with the St. Albert Sports Raiders. That year seemed to go by quickly, finishing first in our division, and playing in the Mac’s Tournament, losing out in the quarter finals to the Saskatoon Blazers.

During that Midget season, I was selected to play in the U16 Tournament for Team Alberta. It was a great experience for me, our team taking home Silver. It was a good “eye opener,” highlighting some elite players from Alberta, Saskatchewan, Manitoba and British Columbia. I liked the feel of competing at a broader level.

Next for me was an invite to the U17 Team Pacific summer try outs in Calgary. Eligible top players were selected from both Alberta and B.C. As the team was to be determined later in November, players had to go back and try to make their club teams. I travelled to Prince Albert, and started strong, scoring 3 points in my first 2 WHL games. I continued to play well and cracked the line up. As our season continued, I was grateful to be chosen to play for Team Pacific at the U17 World Hockey Challenge in Sydney Nova Scotia. I was having a great tournament, leading our team with 7 points in 4 games. That stands out as my most exciting hockey memory so far in my career, as our team propelled to the finals playing Team USA. Unfortunately, we lost, coming away with Silver, but I really enjoyed that International experience.

This past summer, I was granted a tryout as one of the 44 players across Canada to represent Canada at the U18 Ivan Hlinka Tournament. I was not given the opportunity to play, but came away with some new goals.

Outside of hockey, I like to do many things with my family and friends. Most summers and holidays, we spend in Phoenix and different parts of California. I like fishing, playing rec. basketball, visiting my grandparent’s farm, and spending time at the lake with family friends. There are 5 people in my family. I have 2 younger siblings, my sister, 14 and brother, 11. My sister is a competitive dancer, and my brother plays both hockey and basketball. Both of my siblings are very supportive of my hockey and come out to visit me in P.A. quite often. I am also lucky to have very positive, supportive parents.

My dad was very involved with my young hockey, through coaching, encouraging and giving me advice.  He is the main reason I started hockey at such a young age. We also have close family members who are athletes at the National and Professional levels. My mom’s sister, my Aunt Nathalie is a celebrated World Champion English Equestrian, travelling to compete at International levels throughout Canada and the United States. My cousin Avery Lakeman, was selected on Canada’s U17 Women’s National  Team as an underage player, played in the 2014 Concacaf, and U17 FIFA World Championship Canadian Team in Costa Rica. Both my parents have cousins that played hockey in Europe,( Germany and Italy). 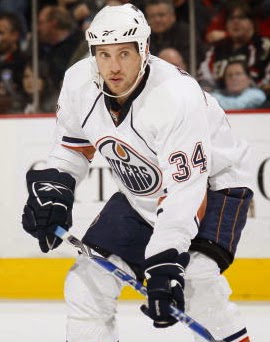 Finally, my biggest inspiration, is my cousin Fernando Pisani. Fernando played most of his career with the Edmonton Oilers, and finished it with the Chicago Blackhawks. I was lucky to get to watch him in many Edmonton games, and see him often as we live in the same community. He has given good advice and taught me both things about the game as well as being a good person and the importance of being professional. He has been a really good example, and my entire extended family has been a great support.

From a dedicated summer of training at Athletes Nation and specific on ice sessions, I have become stronger, faster, and more capable in a power forward role. I have matured more since my rookie season, learning from teammates like Josh Morrissey and Leon Draisaitl, both 1st round picks in the  NHL draft. I feel I have the ability to be a leader, to be a bigger impact player moving forward this season with the Raiders. I will be working every day toward achieving my goal of becoming a highly drafted player in the upcoming NHL draft. As a P.A Raider, I will continue efforts to contribute to my team, making a push toward becoming a championship club.

That’s about everything for my first installment! I want to thank Guy Flaming and The Pipeline Show for having me in studio this past summer, and allowing me to share a bit more about myself and my family. I look forward to continuing up on this segment, and if anyone wants to fire me some questions, feel free to contact me on Twitter (@gens_21)

Thanks for following up on me.

Matteo Gennaro is listed by NHL Central Scouting as a 6'2.25, 187 lb forward. He was given a 'C' rating in their pre-season listing of players to watch for the 2015 NHL Draft. Gennaro managed 5 goals and 15 points as a rookie and through the first 15 games of this season he has generated 4 points.
Posted by Guy Flaming @ 1:36 PM

Sounds like a good kid.
I hope he makes the Jets one day.

Good luck, and hope you make Winnipeg Jets one day!