I had the opportunity on Monday to drive out to Camrose to take in most of team USA's practice and speak with a handful of players as well as head coach Dean Blais. While I was there I ran into frequent TPS guest Dave Starman who will be handling the colour analyst duties for the American coverage of the tournament being shown on the NHL network south of the border.

The practice was entertaining and informative all at once. No surprise but this is a team that is going to demand respect once the 2012 WJC gets underway. Here are some notes and thoughts I had plus some insight from the day in Camrose.


The first thing I noticed about the American squad is the size; you can't help but see it. Only one defenceman is under 6'2 and that's Adam Clendening who more than makes up for his average size in other facets of the game. 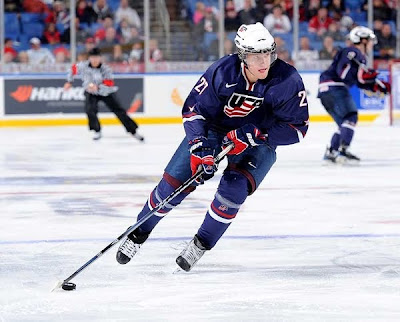 The beef isn't only on the back end though as USA has several forwards in the 6'1 - 6'4 range including Nick Bjugstad, the Minnesota Golden Gopher sophomore who is off to such a hot start. Unfortunately for him, he was a bit banged up in his last outing with the Gophers and is wearing the protective yellow jersey during practice. Those I chatted with during the practice felt that the shoulder injury wasn't going to prevent Bjugstad from playing in the tournament but when I asked coach Dean Blais about it after the skate, he sounded less certain.

"We're day by day with Nick and he'll be in that gold jersey probably until our third exhibition game and then we'll decide whether we'll play him," said the coach, "If there's any question at all, if he's not 100 percent, he will not play. That's the policy that our trainers have and that's the policy we have as coaches; we're not going to put anyone out there and jeopardize not only his career but also the success of the team if you play a guy that's hurt."

For clarification I asked again if Bjugstad's status for the start of the tournament was really in question.

"Well you never know, you never know with any kind of injury and [the shoulder] is a day to day kind of deal," Blais repeated, "We'll make sure that he's in good condition and that he's 100 percent and if he's not we're not playing him."

It's not unlike the situation that Canada is facing with both Jonathan Huberdeau and Quinton Howden. Oddly enough, both of the Canadian forwards and Bjugstad are all property of the NHL's Florida Panthers. 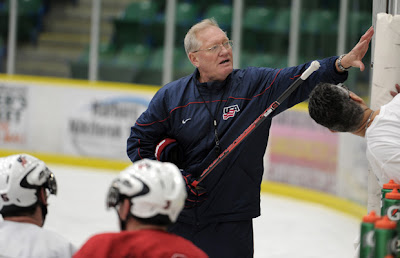 USA begins their exhibition schedule tonight in Red Deer against Russia and coach Blais suggested everyone who dresses for his club better be prepared to impress.

"No one here has played their way off the team which is kind of unusual when you get 28 or 29 guys competing."

"It's not hard to play with them, that's for sure," Zucker laughed, "They have plenty of talent obviously and they are both having great years so far. I'm glad to be playing with them."

Zucker, who has to be considered a strong candidate for the captaincy as a 3rd year member of the team, said he played with Etem as 10-year-olds so they've got some old school history between them.

Speed was the key to the gold medal success USA enjoyed in 2010 and that will once again be a trait of this year's edition. Derek Forbort, a smooth skating 6'5 defenceman with the Fighting Sioux of North Dakota, is one of several big blueliners that can move really well.

"I think that's something that not a lot of teams have is big defencemen but also good skaters and we've got a lot of those guys on the back end," he said before commenting on a couple of the forwards he faces a lot in WCHA action. "It sucks chasing those guys around, especially having [Bjugstad] and Rau on the same line is brutal but I'm just glad that they're on our side." 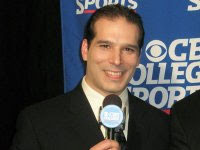 At one point during practice, the players were working on one timers which was clearly something they needed to do. Shots routinely went high, wide or were fanned on. Starman relayed a humorous anecdote that he was once told about college players and the subject of one timers that went something like (paraphrase): "College players are horrible at one timers because they never practice them. They all have to pay for their own sticks at every level coming up so they don't want to risk breaking them so... they don't practice it."

I don't know if that's completely true or not... but it sure looked like it on Monday.

The practice ended in entertaining style with a shootout drill. Considering how many times the shootout has come into play during the WJC as of late, usually with Canada/USA, I wasn't surprised to see coach Blais try it in practice.

The goalies occupied the nets at opposite ends, the skater would pick up a puck at center, shoot on one goalie, circle back and do the same at the other end of the ice; two shots per shooter. 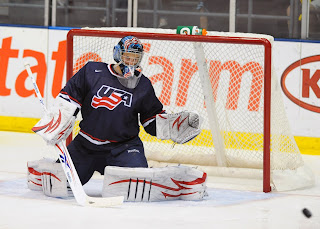 By the time the skaters were finished, only 6 managed to score a single goal and only Kyle Rau was able to best both Jack Campbell and John Gibson (above). Gibson made the highlight save of the drill when he robbed Forbort with his glove. 17-year-old defenceman Jake Trouba beat Campbell with a slapshot from the top of the circle then faked the same move on Gibson to no avail.

The six successful shooters went in the second round, all of them on Gibson, and one by one they were turned away. Gibson stole the show.

"Gibby was for sure the first star tonight," laughed Campbell afterward.

I jokingly asked Zucker if there was a problem with scoring for the skaters or if this was it a case of stellar netminding.

"I think it's a bit of both, obviously the ice was a little chopped up," he laughed, "Two great goalies and they work on shootouts just like we do so they were ready to go and they got the better of us today."

It was a loose, upbeat group. As I was talking to Jack Campbell, Adam Clendening stopped behind him to rub him in the face with the blade of his stick. A couple of the players and personnel commented on how welcoming Camrose has been for them, people going out of their way to make them feel comfortable. The AJHL club, the Camrose Kodiaks, have given up their dressing room for the Americans to use and at least for the next 5 days, USA can feel as though they aren't behind enemy lines in the small city.

That will change come Boxing Day and the start of the tournament.

- In the wake of Charlie Coyle's defection from Boston University to Saint John of the QMJHL, there has been some of speculation as to the future of a couple of other NCAA players. The CHL rights to defenceman Mike Paliotta and forward Connor Brickley, both playing at Vermont, are also held by the Sea Dogs so immediately people began to wonder if the two would follow Coyle to Canada. 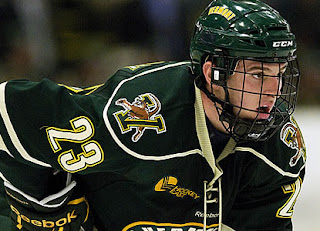 Brickley is in Camrose so I asked him to comment on the record just to get his perspective on the subject.

"My allegiance is still to the University of Vermont right now and it looks like it's going to be there for good but who knows what could happen but for now it's at UVM," Brickley told me.

I asked him if Coyle's decision made him consider all his options including the QMJHL and the Sea Dogs.

"Charlie, whatever it takes for him and his individual growth as a hockey player... my team, I think, needs me back at UVM and my allegiance is to them and I want to help them turn the program around so UVM is my home."

- Apparently TSN was in Camrose over the weekend to do a small feature on the team. I'm told that the network messed up the spelling of the name of the 2010 gold medal winning coach as Dean "Blaze". Most would consider that a small thing but it was noticed and mentioned to me so it obviously drew a reaction from some around USA Hockey.

- Lastly, it was made official yesterday that Justin Faulk will not be loaned to USA by the Carolina Hurricanes. Coach Blais told me that they'd basically planned as though he wouldn't be so the 9 players at camp are the ones they assumed they would have to pick from. Faulk would have been a big bonus though for sure.

NOTE: You can hear all of the interviews with the players and head coach tonight on TPS www.thepipelineshow.com 7-9 pm MST (9-11pm EST).