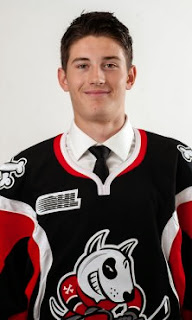 Each season we extend a blogging invitation to a select few players entering their NHL Draft year. Frequent visitors to The Pipeline Show know the extensive list of players who have taken us up on the offer over the last half a dozen years.

This year we have already been introduced to Brandon Wheat Kings goaltender Jordan Papirny and forward Tanner MacMaster of the Camrose Kodiaks.

Today we get the first entry from our guest blogger playing in the Ontario Hockey League. Niagara IceDogs forward Brendan Perlini shares us his back story, one that is definitely one of the more unique paths a NHL-bound player has been on.

Are you ready? After the jump, the first chapter in the 2013-14 Guest Draft Blog from a sure-fire 1st round pick, in his own words.

My name is Brendan Perlini, and I am now in my 2nd season in the Ontario Hockey
League with the Niagara Icedogs.

I was born in Guildford, Surrey, England where I lived with my parents and my brother Brett Perlini until I was 11 years old. Growing up in the U.K was really a great experience, the culture is completely different to North America, from the food you eat to the entertainment and the education system and especially the Hockey.

My dad, Fred Perlini, was a Professional hockey player who was drafted and played with the Toronto Maple Leafs organization in the early 80’s. After some ups and downs with his career he decided it would be best to play in Europe. He played for a lot of teams in Europe until he settled in Guildford Surrey England and played for the Guildford Flames. This was where I was born and lived, went to school, and learned the game of hockey.

Many of you must be thinking ‘how could you have played in England?’

My passion to play hockey probably started from following my brother Brett who is 6 years older than me. I followed him with my parents to his practices and games and tournaments. I was full out skating at the age of 2 as my mother would take me to public skating sessions and I also lived on my Roller blades every waking moment.

In Britain there are so many other sports such as Football (Soccer), Golf, Rugby and Cricket that dominate the culture but I always wanted to play hockey.

Living and playing in Europe I think has helped me develop into the player I am today for many different reasons. We didn’t play as many games in Europe as the kids in North America do during a season; we only had 18 league games but we practiced twice as much.

The beauty of playing in England was that it was very easy to travel to Europe and play in tournaments. We went to tournaments in Scotland, Holland, Germany, Czech, France and Austria so we could face different and tough competition.

Our program, the Guildford Junior Ice Club, was very successful every year due to the fact that we had a huge group of kids that were North American (Expats). The families would be housed in Surrey for job reasons and also many Professional Hockey players and their kids would come to play for the Guildford Flames.

The Hockey programs are very similar to soccer; there was the Pro team and then it seemed to file down to U19, U16, U14, U12, and U10s. My dad was the Head Coach/Hockey Director of the Guildford Junior Ice Hockey Club and foreshadowed every team, so it was never a problem for me to get ice and practice with either my team or the age above. The good thing about playing there was if you were good enough you could practice and play for your own age group as well as the age above.

Both of my parents have always played a major roll in my hockey and development. In fact my mum Managed/Coached my U10 & U12 teams. I have to say that she never played favorites and always gave me a kick in the backside when I wasn’t playing well, which I guess worked because we won the National Championships one year and the next year we made it to the finals.

After England we moved to my family’s original birth land of Sault Ste Marie, Ontario. I was very familiar with the SOO, because we spent our summer vacations there. I have a lot of family there, both my mum and dad’s families all still resided in the Soo, and tons of relatives of ours live up there.

The next 3 years I developed my skills playing 2 years PeeWee for the AAA Soo Greyhounds and one year AAA Bantam for the Bantam AAA Hounds - a lot of travel and fun times. What I enjoyed most was playing outdoor hockey in the cold winters up in the Soo.  My parents would have to drag me out of the cold; I figured that I was catching up for lost time while living in the UK.

Up in the SOO we had good teams; we always won a lot of AAA tournaments throughout Ontario, won a lot of NOHA play downs and made it to the All-Ontario’s 3 years running.

My second year bantam we moved to Detroit because my dad had a job as a hockey consultant. The winter move to the D was great. I played for the powerful Belle Tire Bantam AAA. I also enjoyed being close to my older brother Brett and watching his games who was playing close by at Michigan State University on a 4 year full ride.

The two years at Belle Tire were awesome. We were rated the number one team in the country, we won State Championships and also won the National Championship. My teammates and friends are all doing well from those teams and many will get drafted this year.

I met a lot of great hockey people during this time like Mike Babcock, Gordie Howe, Mario Lemieux, Chris Chelios, and many Detroit Red Wings. Those two years my development soared because I played and practiced with the best kids in the USA as our team was ranked #1 in the Nation.

I turned down many scholarships during my first year of midget in order to play in the OHL as I always new this was my calling and the place that I wanted to play.

In my first year of playing Major Junior I was traded to the Niagara IceDogs so I had to deal with adversity right off the hop. The move for me was great; playing with players like Ryan Strome and Brett Ritchie taught me so much in that short span of time and I consider myself so fortunate to have had the chance to play along side them.
Over the summer I trained very hard with other professionals in the Soo to have a good year, as it is very important because it’s my draft year. I will continually be working hard every day to achieve my goal of one day being chosen during the first round of the NHL draft.

This season, from a team standpoint, we will look to continue our success as a franchise and will be chasing the Memorial Cup and try to go as far as possible.

That about does it for my first installment with everyone; I hope you got to learn a little bit about my family and me. Id like to thank The Pipeline Show for giving me the opportunity and I look forward to filling everyone in on what happens in my life over the next couple of months. Also if anyone has any questions you can contact me on twitter (@Bubzp11) and I will try to get back to you as soon as possible.

Brendan Perlini is a top ranked player for the 2014 NHL Draft having been given an 'A' rating by NHL Central Scouting. Perlini ranks 9th overall on Craig's List, 8th overall for ISS, 11th overall at Future Considerations and is 22nd by Hockey Prospect. The 6'2.5, 205 lb Left Winger currently has 14 goals and 36 points through 23 games with the IceDogs in the OHL.
Posted by Guy Flaming @ 5:00 AM

Good Luck to you Brendan!!!

Can't wait to see you in the NHL!!

I watched your dad play as a junior and was bummed he didn't get a fair shot with Leafs during the Ballard years.

Coincidentally, I watched Niagara play a little while ago in Ottawa vs the 67s and was delighted to see you on the ice.

Keep working. Hope to see you play an NHL game in the not too distant future.

I watched your Dad play in tne UK for both Trafford Metros & Guildford Flames, seem to recall he scored 8 or 9 goals in one game against my own team Telford Tigers. Will be following your NHL career with great interest!

All the best to you, Brendan.
I grew up with your dad and learned to skate on your grandfather's backyard rinks.
I always thought your dad was a better player than he got credit for in Toronto.
I know he is very proud of you and I will follow your career with special interest.
I am looking forward to seeing you play someday against the Canucks!
Maybe your dad will be there and we can share some stories.
Kevin Pistor
Nanaimo, BC
But always a Soo boy!