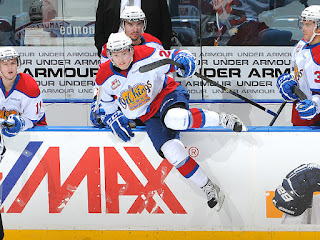 The first entry from Edmonton Oil Kings forward Curtis Lazar came to us back in September. If you missed it you can find it HERE. Chapter 2 included his experiences in the early part of the 2012-13 WHL season and the Subway Super Series.  Part 2 is available HERE.

Offering his thoughts on the last couple of months including the CHL Top Prospects Game, The Pipeline Show is pleased to be able to bring you the third chapter in the 2013 Draft Blog by Curtis Lazar of the Edmonton Oil Kings.

A lot has happened recently regarding the Oil Kings as well as myself.

As a team we hit our groove in the month of December which made leaving for Christmas break that much more enjoyable. I was fortunate enough to have a week at home in Vernon BC where I spent the majority of my time off with what is most important to me, being my family. I had the chance to get out and watch my siblings play some of their hockey which was a blast. It is amazing to see the progress my sister and two brothers have made this year and it makes me proud to see how much fun they have playing the game I also enjoy. Before I knew it I was back in Edmonton anxious and excited to start the second half and make a strong push towards the end of the season and into the playoffs.

December was the month I had a new mindset; I’d let a lot of the stuff I couldn't control influence my game at the start of the season and I felt like it was time to wipe the slate clean and get back to playing ‘Curtis Lazar Hockey’ which involves an ever-lasting smile on my face.

We played some solid hockey for the first part of December and returning from the break we all were ready to continue our success into 2013. The first practice after the break was a little different; we were missing quite a few players for a good cause. Griffin Reinhart, David Musil and Edgars Kulda all got the nod to represent their countries in the World Junior Championship and Dysin Mayo along with coach Steve Hamilton and trainer Brian Cheeseman were off to Quebec for the World U17 Hockey challenge.

This led to great opportunities for players such as Aaron Irving and Ben Carroll to get into some WHL action. Goalie coach Dustin Schwartz and coach Sean Brown got some time behind the bench filling in for coach Hamilton and Brian Cheeseman's fiancé Adrienne Dorn took to the trainer’s room for the team. All in all, we came together closer as a team and picked up some valuable points during this time.

The trade deadline came before we knew it and it was an emotional time for the team. We had to say good-bye to Klarc Wilson who moved onto the Prince George Cougars. Klarc was a great team guy and I really enjoyed getting to know him over the last year and a half. He will be greatly missed in a Oil Kings jersey.

At this time we also swung a deal with Vancouver bringing in Trevor Cheek who fits into our team perfectly. With the addition of Cheek and getting Martin Gernat back from injury, it looks like we have a very deep hockey team which has always been our strength.

Along came January and I was really looking forward to participating in the CHL Top Prospects game in Halifax, NS mid month. I was feeling really good when I landed in Halifax mainly because I had a special game versus Medicine Hat the night before. We earned a 3-0 win and I was able to collect all the goals, it was one of those nights where I was on my game and nothing was going to stop me.

Back to the prospects game.. Halifax was the exact place where I played in the Canada Winter Games for Team BC and we captured the gold medal. Just walking into the Metro centre sent chills down my spine as all the memories I had came rushing back to me.

I was placed on Team Orr who was coached by Mike McPhee and Doug MacLean. One of the goalies for Team Cherry was Tristan Jarry, my goalie here in Edmonton (above) - I wanted nothing more than to put one past him in the game.

Before we played we had a series of fitness testing which was rather unique for myself. There was one on-ice test that I will never forget. It was a reaction test with a green flashing light meaning go left while a red flashing light meant go right, pretty straight forward correct…. not if you’re colour blind which is exactly what I am! I could not tell the flashing lights apart because I am red-green colour blind, this was quite humorous for not only myself but my staff and teammates as well. With a couple adjustments I managed to get through the test.

It was game time and we were all nervous to get that first shift in. The pace was fast and the crowd was loud and oh was it ever fun. I was on a line with great players in Sean Monahan and Kirby Rychel who both play in the OHL. We had a 1-0 lead after the first and we never looked back.

Come the second period, I noticed that my line wasn't generating much offensively and I really wanted to leave an impression on people and show them that I am a multi-dimensional player.

I got tied up in front and some pushing and shoving occurred before I asked Darnell Nurse, my friend and teammate during the Ivan Hlinka tournament, to dance and he gladly accepted. I gave up a lot of size during this tilt but I feel I held my own quite well, I got strung out for a bit but countered with a flurry of my own punches. When we both got to the box we looked at each other and shared a smile and a laugh.

The experience was one to remember, I made some great friends during the couple of days out east and to get the win over Jarry made the trip a whole lot sweeter.

Until next time… All the best!

Curtis Lazar is a center with the Edmonton Oil Kings of the WHL. He is listed by the team at 6'0 and 198 lbs. The B.C. native is universally considered a 1st round prospect for the 2013 NHL Draft. ISS ranked him 11th overall in January while NHL Central Scouting has him 26th in North America. He currently has scored 24 goals and 38 points through 52 games of the WHL season.
Posted by Guy Flaming @ 12:34 PM