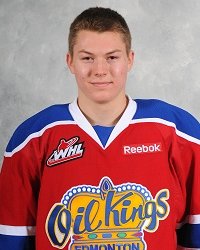 Since 2007-08 we have had a tradition of working with a few select players who are entering their NHL draft year. We thought it would be an interesting exercise that would allow fans a glimpse into what life is like for the players during a key point in their career.

The list of players we have had the good fortune is extensive an includes several guys who would go on to be drafted in the 1st round that June. Jordan Eberle (EDM), John Moore (CLB), Michael Matheson (FLA), Mark Pysyk (BUF) and Joe Colborne (TOR) are five examples of guys we can proudly refer to as "former TPS guest bloggers".

This year will be no different and today we're thrilled to present the first chapter from a key member of the Class of 2013 - Curtis Lazar of the Edmonton Oil Kings.

My name is Curtis Lazar and I am entering my second season with the Edmonton Oil Kings.

I grew up in Salmon Arm BC for about 10 years before my family and I moved to Vernon BC where I currently reside. At an early age hockey was always a passion of mine, my mother said I always seemed to have a hockey stick in my hand. I find hockey as a way to escape and when I'm on the ice I have no worries in the world. People often ask me why I always have a smile on my face while playing and the answer is because I love the game and I play for the right reasons, to have fun!

At the age of five I started playing organized hockey; I played for Salmon Arm minor hockey until I made the move to Vernon where I played two seasons of Pee Wee hockey. Come Bantam I joined a hockey academy out of Kelowna called the Pursuit of Excellence.

It was like I’d died and gone to heaven when I discovered these hockey academies; we attended school in the morning before going to the rink and practicing and working out all five days of the week while playing games on the weekend. The academy allowed me to become a well rounded hockey player but also a great person off the ice and that led to me being selected by the Oil Kings in the 2010 WHL Bantam Draft.

In Midget I joined another hockey academy but this one was in Penticton BC and was called the Okanagan Hockey Academy. I had a great season in Penticton and developed a great friendship with current Kamloops Blazers forward Matt Needham. All in all, I consider myself an Okanagan boy because all locations have helped me so much in my development.

I also have had the opportunity to play in some really neat tournaments growing up; the one that stands out would have to be the Canada Winter Games. Team BC and I won the gold after beating Quebec in the final and that experience was probably the most fun hockey moment I've had thus far. We were lights out that whole tournament and the friendships we made ultimately was what won us the gold.

I scored 11 goals and put up 16 points, I think it was, and to my surprise after the tournament I found out I actually beat Steven Stamko's goal record and Sidney Crosby's point record for that tournament. That was just a little bonus, nothing can compare to seeing that buzzer count down to zero and we all knew that we represented our province proudly.

I also have played on two Hockey Canada high performance teams at the U-17 and U-18 (Ivan Hlinka) level. In the U-17 we unfortunately got bounced in the round robin but we actually were the only team to beat the Russians who won the tournament.

This past summer in Slovakia was a different story though; we steamrolled our opponents and captured a Gold medal. Anytime you get to put on the Canadian jersey it’s something special and to create friendships with guys all across the CHL was a neat experience. I had the privilege of being line-mates with two Halifax Mooseheads in the Ivan Hlinka; Nathan MacKinnon and Jonathan Drouin. Playing with those elite players, my game plan was to just find open ice because I knew they would get the puck to me.

Well that stuff is all behind me and now my main focus is getting the Oil Kings back to the Memorial Cup.

Coming in as a 16 year old rookie last season I had no idea what to expect in my first year of junior hockey. I was the kid all wide eyed, soaking in all the experiences. The veteran guys like Mark Pysyk and Rhett Rachinski really helped me to find my footing in the WHL.

From a team stand point we started out average, our goal was to improve each night and we did that. Before we knew it we were in first place after putting a couple very impressive winning streaks together, and our goal for the remainder of the season was to remain in first.

I credit how well our group of guys got along off the ice to how we preformed come game time. Everybody was hanging out with everybody and it was just a happy environment to be around.

When playoffs arrived it was starting to become new territory for our team but also for the franchise. I played in the playoffs against Red Deer the year before as an underage and we got swept due in big part to a guy named Ryan Nugent-Hopkins who I'm sure all hockey fans are familiar with. Anyhow, we were looking for our first playoff win ever and to get it in game one versus Kootenay was spectacular, we were starting to receive more and more fans and that fuelled us to keep getting better.

Come the third round versus Moose Jaw we were on a 22-game winning streak (combined with regular season). But when TSN gave us a shout out the night before and we lost game 5... the "Bob Mackenzie curse", (as we like to refer to it), was born.

Then came Portland. That series was hands down one of the most emotional couple weeks of my life. I mean, we’d win, then we’d lose then win again, then lose. I tell yeah, it was grueling but incredibly fun! And to come out on top and win a WHL title in my first season was extraordinary and the opportunity to go out to Shawinigan and play for the Memorial Cup was even better.

It was my first time being in Quebec and I couldn't believe how different the culture and even the food was. Usually for pre-game at home we have some type of pasta and a Caesar salad to go along with it. In Shawinigan we were getting an inch thick pork roast and a bowl of soup, it was a little different.

Although we came up short in the Memorial Cup it just makes us that much more determined for another crack at it this year. We have the right guys to do it so I'm looking forward to seeing what this season has in store. I do have to give a big thanks to the guys I roomed with for the majority of the year last season (Henrik Samuelsson and Travis Ewanyk), apparently I snore quite loudly ( I don't think I do) but they didn't complain at all and we became great friends away from the game.

That wraps it up for my first entry. Big thanks to The Pipeline Show for this opportunity. I look forward to keeping everyone in the loop this season and fill you in on all the fun interesting stories about Edmonton Oil Kings and myself. On top of that if you guys have any questions feel free to send me a message on Facebook or twitter (@curtislazar95) and I will answer them in my next blog. I would love to hear from you guys!

All the best, till next time!

Curtis Lazar is a center for the Edmonton Oil Kings. He is listed a 6' and 198 lbs. The British Columbia product is universally considered a sure-fire 1st round prospect for the 2013 NHL Draft. International Scouting Services slotted him 6th overall this past June.
Posted by Guy Flaming @ 6:00 AM

Hi Curtis. Nice to meet you :) I'm a little torn. I want for you and the Oilers both to do awesome this year. But then that means we won't be able to draft you in Edmonton. Something's gotta give [sniff]. Oh well. Good luck and I look forward to following your blog this season.

Great read Curtis and best of luck. Can you briefly talk of your experience with HDI in Cze growing up. My boy will be in Prague in April 2013 and would like to read what you experienced there.