Before we get to tonight's list, take note that we're on at a special time tonight from 6-8 PM MST. We'll pay tribute to our Canadian Military with Remebrance Day tomorrow, we'll also be joined by a Hockey Hall Of Famer turned coach, 2 rookie NHL Dmen, a 2010 draft prospect and the Head Coach for the Springfield Falcons. You can listen online by clicking here.

With 6 of the first 33 players drafted in 2009 playing regularily in the NHL these days, and 13 from 2008 seeing plenty of ice time, I thought about taking a look at 5 first round picks from the past that still have potential, but are running out of time.

5. Bob Saguinetti - 21st overall, 2006The American blueliner did it all in junior. He scored 23 as an eighteen year old and 29 in his next and final OHL season. He also represented the U.S. at the World Junior Championship. But since turning pro, the closest he's came to the ice at MSG is the pre season. Sanguinetti has now been passed by this year's rookie blueliners Matt Gilroy and Michael Del Zotto. However he is having his best season as a pro with 17 points in 14 games for Hartford of the AHL. 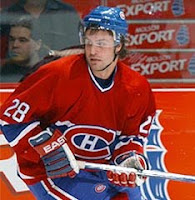 4. Kyle Chipchura - 18th overall, 2004
An NHL scout recently told me that Kyle Chipchura has more offence to give than the defensive player he's been pigeoned holed as. Well in 13 games with Montreal this year, Chipchura has yet to produce a point. Chipchura has good size, smarts and skates well, but has only played a full season once in the last 8 years due to injuries. He's been with Montreal the whole year, but a shoulder injury in training camp limited his playing time and he's been in and out of the line up as a healthy scratch.

3. Jonathan Bernier - 11th overall, 2006
When Jonathan Bernier left for LA Kings camp as a 19 year old, some thought he might not come back to Lewiston. He did and his return to junior started a bit of a free fall for the goaltender. He ended up losing his starting job at the World Juniors that year, and has seen the NHL ice just 4 times. However things might be turning around for the Kings prospect, as he's having himself a bounce back year with Manchester of the AHL. Unfortunately he has to dethrown a possible U.S. Olympian with the big club as Jonathan Quick has the Kings surprising everyone right now.

2. Jack Skille - 7th Overall, 2005
How bad were the Chicago Blackhawks? They've had so many top ten picks, that they aren't haunted by the fact that Jack Skille has less than 30 games on his resume despite the fact that he was 7th overall in 2005. This is the former Wisconsin Badgers 4th year of pro hockey and while he did get in 5 games with the Hawks this year, he is currently in Rockford of the AHL. Drafted out of the U.S. National Development team, Skille averaged 20 points in his two years of NCAA hockey. His best pro season was last year when he mustered 45 points in 50 games.

1. Benoit Pouliot - 4th Overall, 2005
Minnesota hockey aren't so Wild about Benoit Pouliot anymore. Drafted 4th overall behind Sidney Crosby, Bobby Ryan and Jack Johnson, Pouliot has played just 62 games in the NHL and has produced just 17 points. Maybe the Wild saw something noone else did, as Pouliot topped out at 35 goals and 65 points in Sudbury of the OHL and has never had more than 19 goals in the AHL. The 2005 draft has produced many players that have yet to reach their potential, but Poliot tops the list.
Posted by Dean Millard @ 2:55 PM