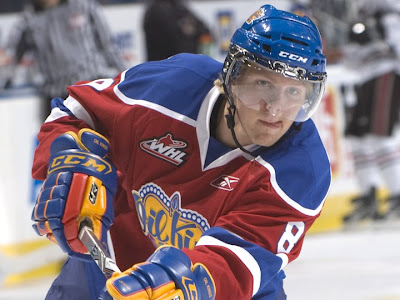 
Before the game, Reinhart was recognized as the team's unsung hero for February. Dylan Wruck assumed top spot on the team scoring list after scoring twice in Saturday's 4-2 win of the Raiders. Rookie goalie Laurent Brossoit stopped 36 of 38 shots after getting beat five times the night before in Red Deer. Forward Colton Stephenson, getting top line minutes in place of injured Josh Lazowski, had a pair of assists. 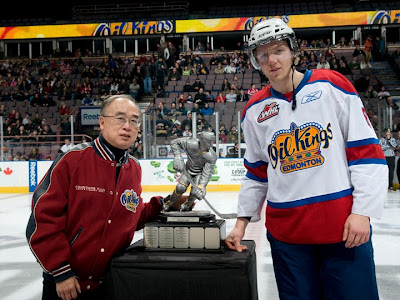 And that's where the positives pretty much end for the Oil Kings.

The bad news came in the final few minutes of the first period when big 6'4, 228 lb Austin Connor finished his check on Reinhart after the rearguard had moved the puck from the corner in his own end. The 1st round pick showed immediate signs of injury, it appeared as though it may have been a shoulder problem, and he skated gingerly off the ice.

After a very quick assessment on the bench from Head Athletic Therapist Brian Cheeseman, Reinhart got up and continued on to the dressing room signaling the end of his night, and apparently the end of his season. The big rearguard sustained a broken wrist on the play.

"It's snapped. He's going to have to get pins put in," said a somber Bob Green after the game. Reinhart went for x-rays immediately and the bad news was delivered to the GM who relayed the prognosis my way. I asked what the expected recovery time is for a broken wrist.

There are just 7 weeks remaining in the regular season and few realistically expect Edmonton to be playing 5 weeks worth of playoff hockey. With his Oil Kings season apparently finished, the bad news gets compounded by what else he stands to miss with such a lengthy layoff.

"It's really too bad because if he was available, there was a very good chance he'd play in the U18's," said Green. Being an underage player at that premier event would have been a huge feather in Reinhart's cap and a highlight on his resumé heading into 2011-12, his NHL Draft year. Reinhart was captain of Team Pacific during the U17 Challenge over the most recent Christmas season. (Photo below: Andy Devlin/Hockey Canada) 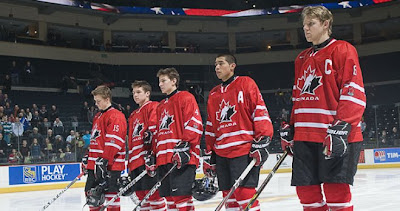 The 2011 World U18 Championships will begin on April 14th in Crimmitschau & Dresden, Germany. Canada's first game is scheduled for the 15th against the Czech Republic.

Focusing on the team, it's clearly a huge loss. Reinhart is the current leading scorer among defencemen on the roster and he's also one of the biggest, most reliable players on the team. Green says that other players are going to need to step up.

"It's an opportunity for a guy like Keegan Lowe to take on more minutes and more responsibility," said the GM, "And Marek Hrbas is going to have to raise the level of his game a notch."

The team has already recalled 15-year-old 2010 1st round pick Mason Geertsen who will travel with the team on their 4-game foray through the U.S. Division. Green says he's also looking at Ashton Sautner, their 8th round pick in 2009. He's currently playing in Moose Jaw which is convenient because that's where the Oil Kings will be in 11 days.

Another option Edmonton has is to drop Cameron Abney to the back end like they did at times last season when the injury bug hammered the team.

It's never good timing when you lose an impact player to a lengthy injury but with games against Tri-City and Portland this week during a 4-game-in-5-night jaunt across the border, losing Reinhart is a massive blow.

Damn. Tough break for the kid. Was having a great season. I still expect him to be a top 3-5 pick in the 2012 NHL draft.

I am not gonna lie this actually made me sad for a few minutes. I was enjoying the play of Rienhart. He was the biggest reason I would go to watch the Oil Kings

Tough break for the kid and the team. He was having an excellent year and looked like he'd be a key piece as they pushed to the playoffs.

Considering the tenuous grasp the Oil Kings have on a playoff spot right now this is an injury they really couldn't afford. Some other guys on the blueline are going to have to step up big time now.

Today Bob Green mentioned the expected recovery time to be "8 weeks"... that's a month sooner that I was told on Saturday. Still too long for the regular season but perhaps he can be back in time for the U18s.

Very similar to Mark Pysyk's situation last year. He was about a week away from healthy enough to go but had to miss the tourney.