For a change of pace on the minor league updates I thought I'd check in with the Stockton Thunder who are now seven games into the ECHL season and sit in 3rd place in the 5-team Pacific Division.

It's early but if the .429 winning percentage doesn't really get anyone excited, keep in mind that only opening night was a home game for the California squad. The Thunder have a 3-4-0-0 record with victories coming against Victoria (twice) and Bakersfield. The fact that Stockton hosts the Salmon Kings tonight and tomorrow should be a good thing then.

Cory Urquhart leads the team in scoring with 3 goals and 11 points which has him tied for 9th overall in league scoring. Urquhart is a former 2nd round pick of the Montreal Canadiens (40th overall in 2003) who has never gotten a sniff at the NHL. The Oilers... I mean the Springfield Falcons, signed him to a contract last summer. Urquhart was knocked out of the Falcons' last game after a collision and is currently listed as day-to-day.

There is a considerable drop-off in scoring to get to Garet Hunt, second highest point getter for Stockton this far with just 3 goals and 3 helpers for 6 points. Hunt was the piint sized pugilist of the Vancouver Giants the last few years and does standout in 2 categories so far: his plus-5 rating and 26 PIM are both tops on his team.

Bryan Lerg has only played half of the games in Stockton but his 5 points still put him in a small group of point-per-game Thunder players. Frankly, I would surprised to see Lerg back in California this year.

Players with Edmonton connection like drafted forward David Rohlfs and recent selection Jordan Bendfeld are not making much of an impact on the score sheet. Former Michigan Wolverine Rohlfs has 3 points but is also a minus-7 while Bendfeld is pointless thus far and only has 6 PIMs. 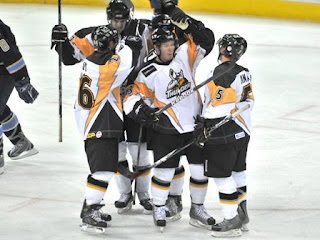 Some familiar names since they were all at camp this year... Robbie Bina, Ryan Huddy, Jamie Bates, Justin Chwedoruk and Milan Maslonka are all performing like ECHL players. Take that as you will.

Ryan MacMurchy and Adam Huxley have only played in two games each so far but the former has 2 points and the latter (a crowd favorite) has 7 PIM in thise 2 games.

Josef Hrabal will make his Stockton debut tonight after being sent back down from Springfield earlier in the week.

The two players Oiler fans are most likely interested in hearing updates from are goaltenders Bryan Pitton and Andrew Perugini (pictured). Coming into this weekend's play, Pitton has a 2.99 goals against average and .899 save percentage that has him ranked 24th in the league in both categories. Pitton, a 5th round pick in 2005, has started 6 or Stockton's 7 games. 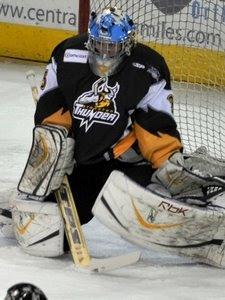 On the other hand, Perugini's 60 minutes is an extremely small smaple size so take his .914 save percentage (16th) and 3.00 GAA (25th) with a healthy dose of sodium. Immigration issues kept him from getting into action until game #7 but you can expect to see more from him now that the red tape has been navigated.

As a team, Stockton's power play is ranked 4th in the 23-team league with an impressive 22% effective rate. The California club has potted 9 of their 25 goals while having the man advantage. The PK isn't horrible, placing 9th with a .829 which might be helped a bit by the fact that the Thunder are the 4th least penalized team in the ECHL right now.

The Thunder will "Go Pink" tonight, an annual tradition based on a breast cancer promotion where the ice is literally turned pink.

The Pipeline Show has learned that winger J.F. Jacques is about 6 weeks away but is beginning his rehab "this week"... Springfield winger Slava Trukhno burst out of the gate with 5 points in 3 games but has cooled off considerably since then. The Russian has managed only 1 goal and 1 assist in the last 6 games... Rob Schremp and Ryan Potulny continue to play well together. Schremp has 8 assists in 7 games (no goals) and Potulny has 8 goals (no assists) in 9 games. If you could meld these two together you might have a hell of a player... Liam Reddox is riding a 5 game scoring streak where he has picked up 6 points in that span... 2008 1st round pick Jordan Eberle is currently 7th in WHL scoring with 14 goals and 26 points in 19 games and recently had a 10-game scoring streak come to an end... Once red-hot Milan Kytnar has come back down to Earth. He has just a single assist and no goals in the last 8 games... Defenceman Alex Plante has been named as an alternate captain in Calgary after ending his self imposed exile... Rimouski forward Phil Cornet has 16 points in 15 games but put into perspective where league leaders routinely have twice that much. Cornet is tied for 40th in QMJHL scoring... Collegian Riley Nash finally gets to play a regular season game as Cornell's ridiculously late starting schedule begins tonight... In Sweden, Linus Omark is tied for 8th in Elite League scoring with 17 points in 19 games...

Thanks for all of that, Guy. The less-visible information (Jacques, Kytnar) is especially appreciated.

Note the slight correction on Jacques... "today" changed to "this week".

Marc-Andre Bernier I believe is still out of action. Is this due to immigration issues as well? He put up some solid numbers last year as far as the ECHL go. So I am sure Stockton could use him.

Very poor review, all you did is go through the Thunder stats sheet and add a few comments. I guess this shows the difference between a reporter and a blogger.

Thanks 'Anonymous' for your comments.

I suppose it's possible that you don't know that I specialize in covering the prospects of the Oilers and do so by keeping in contact with players, coaches and scouts on a VERY regular basis.

While I didn't quote anyone in this particular update, I have spoken with some people this year about Stockton.

The purpose of this update was really just to point out some general info to the casual fan who may not have even looked at the ECHL yet this year.

I appreciate you reading the blog though all the same. Thanks!