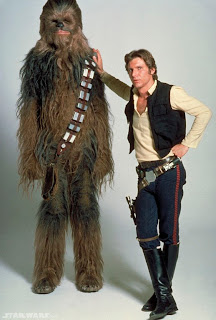 Yesterday, my compadre Dean Millard had an interesting post about how the Edmonton Oilers are calling up the wrong players to cure what ails them in the NHL. I do NOT disagree with him, let's get that clear right up front. However, today I'm going to play Devils Advocate and take the other side of the issue just for poops and chuckles.

You might call Dean the Chewie to my Han Solo, he'd obviously prefer that I use the 'ABBA blonde and redhead' analogy, but suffice to say that when it comes to prospect related stuff, most of the time we agree.

But if I'm going to try and shoot down his 'time to call up Schremp, Brule, Potulny' theory I'll do so by saying this: They might be hot in Springfield but even by AHL standards the top Oiler prospects are extremely... average.

I've been looking into some stuff, what Dean likes to call 'research', and have discovered that if you took the top scorer from each of the 29 AHL clubs, Springfield's Rob Schremp would rank 14th for points per game (1.12) and 18th for overall points (18). I don't really like going simply by points because not all teams have played the same amount of games... so can we agree to just go with Pt/G.?

Portland is an intersting team to look at. Scoring leader Mark Mancari was recently recalled by the Buffalo Sabres thanks to his 25 points in 14 games (1.79 Pt/G) yet behind him are two rookies who really do look like something a NHL team can be excited about: Nate Gerbe and Tim Kennedy who have 22 and 21 points respectively or 1.29 and 1.24 Pt/G scoring rates. But they are leading the division so perhaps that's not exactly a fair comparison for the Falcons.

In second place in the Atlantic Division is Providence who Springfield trails by a single point and recently thrashed 5-1. The Bruins have 3 players with more points than Schremp including Johnny Boychuk, a long forgotten bust pick originally belonging to Colorado. But Providence has played one game more than Springfield and three more than Schremp.

Remember Danny Syvret? He's still outscoring everybody in Springfield these days too.

My point is, no one outside of an Oiler fan is likely to look at the AHL stats and come away thinking 'wow, the Falcons have a few guys who really should be in the NHL right now'.

To their credit, the Falcons' best players are hot right now and none more so than Schremp who has 8 points in the last 4 games. Ryan Potulny has 7 in that same span while Gilbert Brule has 5 and Slava Trukhno has 3.

It's a good thing they have stepped up their production recently; I did this little exercise a few days ago and there were only 2 or 3 teams in the league with a top scorer who had less points than Schremp, meaning instead of 18th he would have been 26th or so.

Bryan Lerg (pictured) has been watching former MSU teammates like Kennedy in Portland and Justin Abdelkader in Grand Rapids get lots of opportunity and have produced as a result. Lerg must have been wondering if he signed with the right organization considering he was right alongside those two players last year at Michigan State scoring at a near identical pace. Lerg has been back and forth to Stockton a couple of times but has managed 5 points in 7 games with the Falcons (5th best Pt/G on the team).

To make a long story short, or at least a little shorter, I do agree with Dean that the time has come for the Oilers to look to the farm for some offensive help. Tim Sestito has been sent back to Springfield, Liam Reddox can follow suit. Schremp and Potulny have been a formidable pairing so far and neither (according to EDM cap expert Rick Olczyk) have to clear waivers to come up so there is nothing standing in the way. 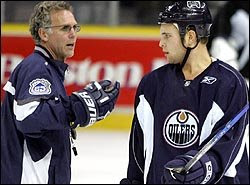 Something has to change. Craig MacTavish has tried just about every line combination mathematically possible but has still not found the spark his team needs. Schremp is hungry, Potulny isn't going to hurt.

It's time to try something new but the Devils Advocate in me can understand why it hasn't been a slam dunk decision before now.

Prospect Notes: 2008 1st round pick Jordan Eberle had 2 goals and 2 assists in the ADT Canada-Russia Challenge earning Player of the Game honors in Swift Current... Tim Sestito was the third Stockton Thunder alum to play in the NHL when he suited up against Los Angeles on Wednesday. The first was defenceman Bryan Young two years ago while Liam Reddox joined the group last season... Andrew Perugini is impressing with his play in California for the Thunder. He currently has a .925 save percentage and 2.64 goals against average which rank 15th and 10th best in the ECHL... Swede Linus Omark is just shy of a point per game having 24 points in 26 SEL games with Luleå. The 21-year-old leads his team in scoring and is tied for 9th in the entire SEL... When Sweden released their 2009 WJC roster earlier this week one noticeable omission was 2007 and 2008 veteran Johan Motin. Motin was chosen by Edmonton in 2008 in part because of his impressive record at international events... Schremp's 17 assists in 4th best in the AHL while Potulny's 10 goals ranks 11th...
Posted by Guy Flaming @ 11:16 PM

Interesting article Guy re the comparisons, however may I ask if each team you are comparing play the same systems? Do the systems used by the farm teams usually match those of the parent team? Do all teams play the same penalty kill system, or for that matter the power-play? Can you do a correlation re the top scorers on the Oil and where they may stack up to other NHL teams, and than compare that ranking to those stats that you compiled for the Falcon top scorers? Do you find it unusual that the farm team PK is as lame as the their parent club? In terms of total goals scored, where would the Falcons stand in the American league, and how would that compare to the Oilers GOALS FOR standing in the NHL?

I guess what I'm asking as a frustrated OIL fan is why are we continuing to see the same concerns, year after year in terms of finding goals? Look, I watch for pure entertainment and do not get into how the systems work, however as a fan I can tell you that it is becoming harder and harder to watch the OIL play, as win or lose they have become a boring team.

It would stand to reason that the farm team would play the same systems that the parent team plays, so when you see that the so called stars from both the parent team and farm team are not highly ranked in scoring, and the PK is as dismal on the farm as it is with the OIL, or that your overall scoring is ranked low in both leagues, wouldn't one wonder if in fact it may be a systems issue?? Do we draft the right players to play the coaches system, or are we just drafting the best player available and attempting to change them into the player required to play the coaches system?? Better yet, maybe it's just the system??

I'm finding that being an OIL fan is like 'Ground Hog Day', and the marks on the head from pounding my head against the wall year after year are beginning to become permanent!!
Cheers,
The Wet Coaster (Once again I apologize for the long rant)

so wouldn't it make the most sense to call Schremp up now, when he's hot?

but even if we did, MacT would throw him on the fourth-line when really he would need to play on the first two to be effective.

having said that, I totally agree with you that our prospects are decidedly average