The Roster Battle: The Forgotten Man 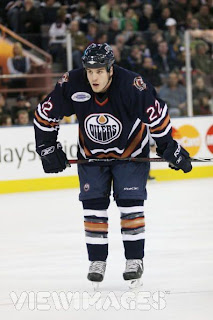 It isn't a stretch to say that the ideal player Edmonton has in mind for their fourth line is right under their nose yet most Oiler fans have a hard time believing that J.F. Jacques is the right guy.

Once known as The Crazy Train during his days in the QMJHL with the Drakkar of Baie-Comeau, Jacques' success at the pro level has been completely on the farm. With 53 NHL games under his belt the personable Jacques is still without a point and that leads many fans to write him off as a bust or a prospect.

Edmonton selected Jacques in the 2nd round back in 2003 using the second pick they acquired from New Jersey when they swapped first rounders. (You know, the little known Parise/Pouliot deal). His junior career with Baie-Comeau was largely under appreciated because the Drakkar were a below average team for most of his tenure. He was teammates with Patrick Thoresen for one season, finished off as team captain and led the squad in scoring during the 2004-05 campaign with a mere 78 points. 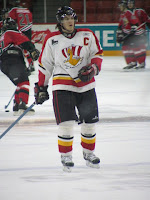 Throughout his QMJHL days he gained the reputation as one of the toughest and most feared players in the league. His penalty minutes dropped significantly after he was drafted simply because he didn't have a lot of challenegers. In his last season with the Drakkar the Oilers claimed that Jacques could pretty much do whatever he wanted to do on the ice because no one was willing to try and prevent him. It's why his point totals nearly doubled from year 3 to year 4.

He ended the 2004-05 season with a brief 6-game stint in the AHL with the Edmonton Road Runners. This was my first opportunity to see the man-child play in person and to this date I still insist that his first shift with the Road Runners was the best I've seen of him as a pro.

Jacques is fast and thrives on playing the body which is exactly what the Oilers want to see from him. With the deals that the Oilers have made over the off-season, one could make a strong argument that they are a softer team to play against than in 2007-08. One of the things Jacques brings to the table is this:

Now Jacques is not a natural goon; he's a big strong tough player who can play that role but he has more to offer. The problem thus far has been that he's been trying to do too much at the NHL level rather than simply playing the role Edmonton wants him to perfect before expanding his game. Edmonton wants a running mate for Zack Stortini, another player who will throw the body around, antagonize the opposition and when the situation arises take care of business just like he did in the clip against Columbus.

Up to now, that's been challenging for Jacques to accept. At every other level including the AHL, he's been able to do all things including score so making the mental adjustment to accept his role has taken time. However, I'm told he's now flicked that switch.

Why Jacques will make the team: Of all the 'bubble boys', those players with realistic chances of making the team out of camp, Jacques is the biggest and strongest. When you picture the stereotypical fourth line player, the energy line player, Jacques best fits the job description. Especially when picturing a replacement for Curtis Glencross... who in the Oiler system most resembles his style of play if not Jacques?

Jacques comes cheap. His newly signed 2-year deal will only cost Edmonton around $700K so he's a cap friendly option.

He's been in the system for a while now, has made spot NHL appearances in each of the last three seasons so you could say that he's paid his minor league dues and is in line for a full promotion.

Why Jacques will not make the team: Injuries. Over his career Jacques has been hurt several times to various degrees. A hyper-extended elbow with the Springfield Falcons, shoulder troubles in junior but most importantly a season ending back injury last year. Jacques was limited to only 38 minor league games in 2007-08 before running into the back problem that he has described as a herniated disc.

Surgery was considered this off season but delayed when rest and rehab seemed to be doing the trick. However, just because Jacques says he's fit and ready to go for camp, that doesn't mean it's not just lip service; why would he say otherwise? He's not going to plant the seed of doubt in the collective mind of the organization as to his health.

However, if he's not 100%, he's not going to make the team and camp will reveal that one way or another.

Although drafted the same year as Marc Pouliot, Jacques has not played enough NHL games where he would have to clear waivers to be sent to the AHL (According to Assistant GM Rick Olczyk). Being waiver exempt gives the Oilers an out to settle any close roster battle and they can use the excuse of wanting to give Jacques playing time to regain his form after the injuries.

The lack of hard physical training may have set Jacques back from a conditioning persepctive. That's just specualtion on my part but it's reasonable to expect that with the injuries that he hasn't been over-exerting himself while training. If that's the case, it's probably unfair to expect that he'd come to camp and win a spot that's hotly under contention.

Whether or not he's the leading candidate, J.F. Jacques should not be The Forgotten Man when camp opens because he's got every right to consider his chances as realistic. Oiler fans may have begun to write him off but the organization certainly has not and their faith my prove justified sooner rather than later.
Posted by Guy Flaming @ 3:24 PM

Wow. Great stuff, very enlightening. I hadn't written him off but I did wonder what was his mental block. Glad to hear he flicked that switch, maybe watching Glencross had something to do with it? Anyway not forgotten, still pulling for him.

great stuff. those 2 scraps are top notch. hopefully he tears it up in camp.

ps - the Oilers are so dumb for not using the retro jerseys non-stop. its like night and day for having some real unique identity in the league.